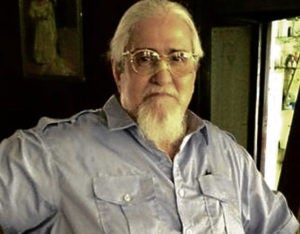 His wife Madie said Gallaga died from cardiopulmonary arrest at the Riverside Medical Center in Bacolod City at 11:47 a.m.

Gallaga had a heart bypass 16 years ago, a family friend said.

The remains of Gallaga are set to be cremated today, May 7, but there are no exact burial plans yet.

Gallaga is survived by his wife Madie and children Bing, Michelle, Datu, Jubal, and Wanggo.

“The Gallaga family announces with great sadness the passing of Peque Gallaga. He was a visionary director and artist; a loving husband, father, and grandfather; and a dear friend. He has brought so much joy to so many people and he will always live in our memories and his art,” a statement sent by Madie read.

“There will be no service as we will observe safety precautions during these times. We are grateful for your thoughts, well-wishes, and prayers but we would appreciate some time to grieve as a family in private during this very painful time,” it added.

Born Maurice Ruiz de Luzuriaga Gallaga, the Negrense director was known for his film “Oro, Plata, Mata,” which he directed after winning a scriptwriting contest sponsored by the Experimental Cinema of the Philippines.

He finished his elementary and high school studies at the De La Salle University in Manila, and his bachelor’s degree in commerce and liberal arts at the University of St. La Salle in Bacolod.

He taught theater and film at the University of St. La Salle.

On moving back to Manila, he co-directed the film “Binhi” with Butch Perez and directed the movies “Virgin Forest,” “Scorpio Nights,” “Unfaithful Wife,” and the “Manananggal” episode.