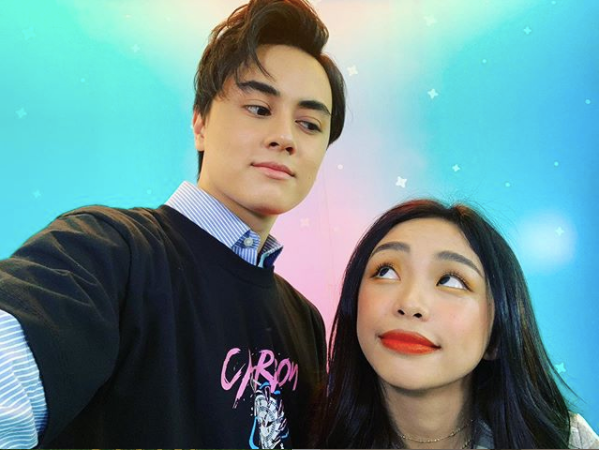 With bouquets of flowers, cakes and sweet treats, actress Maymay Entrata’s 23rd birthday in quarantine still was enjoyable, through the loving effort of her family and friends.

Entrata got a personal greeting from on-screen love team partner Edward Barber, who described the actress as “a bright star of hope” via his Instagram post during Entrata’s birthday yesterday, May 6. Barber also assured the actress that he will always have her back.

“I know things didn’t go how you planned this time,” Barber said, referring to Entrata’s birthday celebration. “But I know that won’t stop you from smiling.”

Through all the chaos in the World, through all the joy and pain, all the storms brewing in our lives, you are a bright star of Hope. I know things didn’t go how you planned this time. But I know that won’t stop you from smiling. Your heart is full of Gods love, and he’s blessed you so you can be a blessing. And that’s what you are. God bless you always. Don’t forget that I have your back, HAPPY BIRTHDAY MAY🕊 and don’t forget that you are #GodsForeverPrincess 👑

Earlier that day, Entrata was apparently about to go to bed when she was surprised with balloons and a small chocolate cake by some of her companions, as seen on her Instagram post on May 6.

“Yung akala mong matutulog kang malungkot (When you thought you were going to bed sad),” she said.

Entrata also expressed how grateful she is for the overflowing blessings that came her way during her birthday celebration. The “Pinoy Big Brother: Lucky 7” winner thanked her family, friends and fans for being with her in her “fairytale-like” journey, on a separate post.

(I thank the Lord because I only asked for what was enough for me but what He gave in return was more than that. [That] is a blessing, a treasure that can never be bought nor replaced by anyone or anything, and that is your love for me.)

Entrata and Barber, known as “MayWard”, previously clarified that despite their on-screen romance, they have decided to just remain friends in real life.

The two said that being best friends is “more beneficial” to them for the time being. Entrata and Barber have been a love team for three years after being contestants in the 7th season of the reality TV show, “Pinoy Big Brother”. After the announcement, they both assured their fans that they will continue working together on various projects. JB