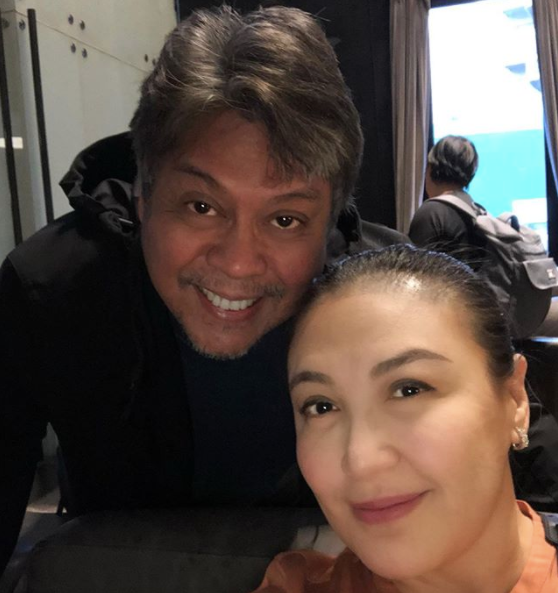 Sharon Cuneta stood up for husband Senator Francis “Kiko” Pangilinan after he was criticized for an issue on the Universal Health Care (UHC) law.

The Megastar expressed how proud she was of her husband for supporting agriculture in the country on Instagram yesterday, May 4. Cuneta posted a picture of a letter from Cotabato governor Nancy Catamco thanking him for a policy that helped North Cotabato “boost food security and stimulate economy.”

One Instagram user, however, brought up her concern about Philippine Health Insurance Corp. (PhilHealth) hiking the mandatory contribution of overseas Filipino workers (OFWs) this year. The increase in premium payments is part of the implementing rules and regulations of the UHC law.

“[Ms.] Sharon, but he authored again this OFW 3% mandatory for UHC… sana naman po makaisip din ng hindi pahirap sa amin (I hope that something will be thought of that will not add to our burdens),” said one @sunshineshinesjoy.

Cuneta responded after consulting her husband. “I just asked him about it now! Lam mo naman si misis (You know what a wife is), Commander-in-chip!” 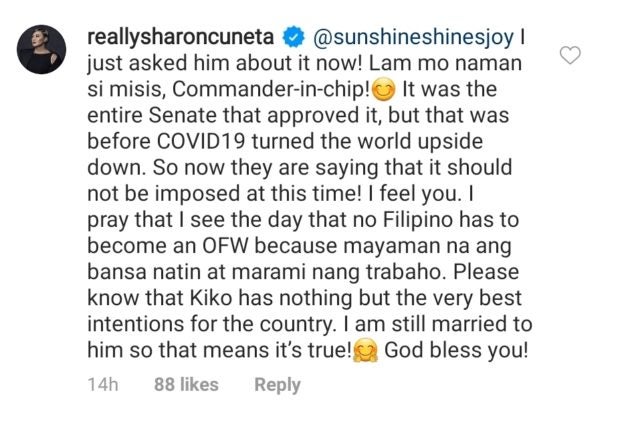 “It was the entire Senate that approved it, but that was before [COVID-19] turned the world upside down. So now they are saying that it should not be imposed at this time!” she said.

“I feel you. I pray that I see the day that no Filipino has to become an OFW because mayaman na ang bansa natin at marami nang trabaho (our country is already rich and there are many jobs),” she added.

“Please know that Kiko has nothing but the very best intentions for the country,” she wrote. “I am still married to him so that means it’s true!”

Pangilinan was not a co-author of the Senate bill. It was Sen. JV Ejercito who was the principal sponsor and co-author, along with other senators. The UHC Bill was signed into law in February 2019.

Sharon gets ‘Crash Landing’ surprise from hubby Kiko for anniversary