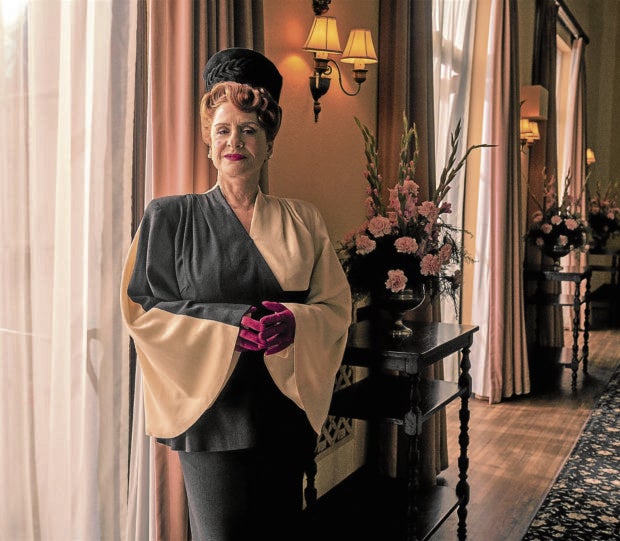 The musical theater legend, who was calling from her Connecticut home in this recent videocon interview, plays Avis Amberg, the wife of a studio mogul, Ace Amberg (Rob Reiner). When Ace suffers a heart attack, Avis takes over the fictional Ace Studios, where Darren’s director character is trying to make his first film.

The Netflix series is Ryan’s revisionist take of Hollywood’s golden age, based on real-life stories and mixed with what-if wish-fulfillment fantasies.

“We bonded over his knowledge of theater, which is extraordinary,” the Tony- and Grammy-winning diva continued about Darren, who has several Broadway credits to his name.

“Darren was actually so thrilled to be sitting where the actors were waiting, when we were all involved in a scene with actors who are actually on Broadway or have been for most of their careers—Joe Mantello, who is so wonderful in this, me, Holland Taylor and Jim Parsons.”

“Darren is a wonderful spirit,” Patti added. “He wanted us all to get together. So at one point, we went to his bar (Tramp Stamp Granny’s in Hollywood). I was drinking vodka martinis, which I don’t normally do. I got drunk and they convinced me to sing ‘Don’t Cry for Me Argentina’ (laughs). It’s kind of silly singing that in a bar in front of young kids. But they sang it with me! It was sort of karaoke ‘Don’t Cry for Me Argentina.’”

Ryan presents a Tinseltown with “casting couches” in secret office rooms. Patti had an innocent perception of Hollywood when she was growing up in Long Island, New York. Patti remembers watching “Swiss Family Robinson” when she was 12 and falling for Tommy Kirk, dreaming of going to Hollywood to be his leading lady.

“My dad (Orlando Joseph LuPone) started an extracurricular program for children in elementary school, and so I started dancing,” she recalled. “We grew up in a small town in Long Island in the ‘50s and none of that was around. My parents had nothing to do with show business so they wouldn’t have known casting couches. They wouldn’t have known any kind of dangers.

“They only knew the Golden Age of Television in the ‘50s and how wonderful everything was.”

Then, Patti revealed her interesting Hollywood connection. “My mother (Angela Louise, nee Patti) was best friends with Lucille Ball. They grew up together in Jamestown, New York. So we got a different idea of what show business was because of Lucille.”

The diva, known for her humor and laughter, quipped, “The other thing about casting couches is, I was never invited onto a casting couch; I was asked to leave the room (laughs). So I never had to worry about it.”

Of course, we got intrigued with her family’s ties to the original queen of comedy. Patti obliged and began, “When I was a kid, Lucille would call the house. She would be in California and we would be in Long Island. Every time she was in New York, she would call my mother and my Aunt Tina, who would both jump in the car and go visit her in New York City.

“I used to answer the phone. Lucille would say, ‘Hello. Hi, Patti, is your mom there?’ ‘Yes, who is calling?’ ‘It’s Lucy.’ Of course, I would drop the phone screaming and my mom would come in.

“Lucy saw me onstage doing ‘Evita’ at the Dorothy Chandler Pavilion (in LA). She came backstage. I still have the platter and the cup that she gave me. She said she couldn’t believe that her daughter (Lucie Arnaz) and Pat’s daughter (Patti in ‘Evita’) would be on Broadway at the time because Lucie was doing ‘They’re Playing Our Song.’

“The last time I saw Lucy was when I was doing ‘Anything Goes.’ Someone came backstage and said, ‘We are not supposed to tell you, but Lucille Ball is in the audience.’ I got on the phone with my mother and I said, ‘Mom, get in here because this is probably the last time you are going to see Lucy.’ And it was. I have pictures in my scrapbook of Lucy and my mother when they were in their teens. It’s pretty amazing stuff.”

Patti’s lonely studio head wife character patronized a Hollywood gas station, based on the true story of Scotty Bowers, known as the Hollywood Pimp and catered to the rich and famous, straight and gay, starting in the ’40s.

Patti said she understood why her Avis character would frequent such a gas station, where the sex client’s code was “Dreamland.” The irrepressible diva said she relished shooting sex scenes with 26-year-old David Corenswet, who portrays a “full-service” attendant and an aspiring actor. There is a racy scene with Patti and David by a staircase.

In post-World War II America, there was still sexual repression. So Patti said she got it when a prominent woman like Avis would patronize the brothel owned by Ernie (memorably played by Dylan McDermott).

“As long as they didn’t get caught,” Patti stressed. “I’m sure women have been doing it for centuries. But in this particular case, Avis did it because she was extremely lonely. She had a lousy marriage and she could do it because I also think she risked getting caught. She didn’t particularly care.

“And it would be more exciting had she gotten caught. But I am sure if there was a gas station and you know this is loosely based on Scotty Bowers. He talked about that. So if it still goes on, more power to you, ladies (laughs).”

On how Hollywood has changed regarding its acceptance of gay actors as leading men, Patti answered, “I think it’s less difficult than it was back in the ’40s. It depends on what studio you go to. But great strides have been made for homosexual men and women, transgender men and women. And a lot of that is attributed, especially the transgender, to Ryan Murphy.”

In the conservative 1940s, a woman running a studio was probably a fantasy. “I don’t think it would have been possible,” Patti agreed. “However, when Ryan offered me the role, he said it was very loosely based on Irene Selznick, Louis B. Mayer’s daughter. She was married to David O. Selznick. She was, by all reports, the brains behind David O. Selznick.