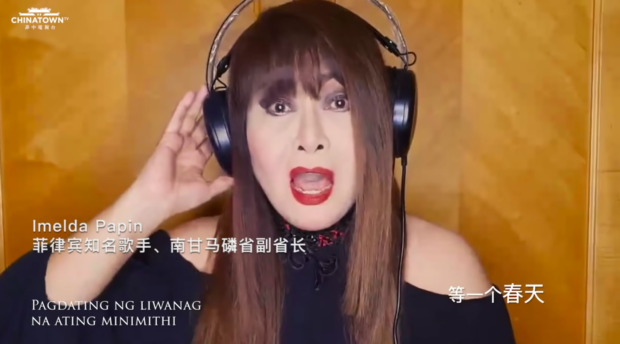 Camarines Sur vice governor Imelda Papin has aired her side in being part of “Iisang Dagat” (One Sea), a song produced by the Chinese embassy in Manila.

The song, with lyrics by Chinese ambassador to the Philippines Huang Xilian, has roused widespread backlash amid the Philippines and China’s ongoing disputes over West Philippine Sea claims.

Papin, dubbed a “jukebox queen” in the country, was one of the two Filipino singers who performed Tagalog portions of the song. She responded to criticism of the production yesterday, April 27, on the morning radio show “Dobol A sa Dobol B” hosted by Arnold Clavio and Ali Sotto.

Papin said she was not paid for her performance and that she only received her copy of the lyrics she sang after the Chinese embassy called her to participate.

(The lyrics are beautiful. It’s all about helping during this time, unity in helping, like that, like together, holding hands for a beautiful future.)

(It’s all about loving each other because it was intended for this time, that we are fighting this problem we are facing, the enemy we don’t see, which is COVID-19.)

She was asked if she was aware of the political issues between China and the Philippines, such as the diplomatic protests filed against China days before the song was released on YouTube on April 24.

(I was not aware of that because when it was offered to me, when it was sent to me on that day, I recorded it right away the next day.)

(Because they wanted to make it in time for the Chinese medical team, for the doctors who came here, like a gift to them.)

(Of course, I would think twice. But what it comes off to me is it’s all about COVID-19, that we should help each other.)

(There is no malice at all. My intentions were good because my advocacy is unity. Of course, [I’m] Imelda Papin, I give inspiration through my voice.)

On the song being called a piece of propaganda, she said, “To be honest, hindi ko alam kung iyon ay propaganda nila.”

(To be honest, I didn’t know if that was their propaganda.)

(For me, I had good intentions. I was just thinking of the word that is helping each other during this time.)

(One Imelda Papin cannot be a traitor to the Philippines. Hello!)

She also stressed that she would defend the Philippines.

(Of course, I am a Filipino, my loyalty is to my country. I was born here, I am a true Filipino, until the end I will remain a Filipino. Of course, if our country is being oppressed, I will fight for it.)