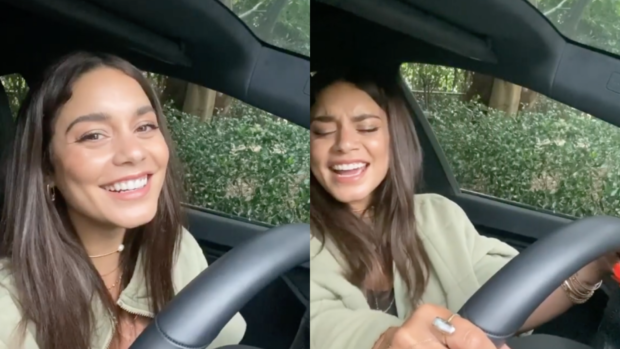 Vanessa Hudgens took a trip down memory lane as she sang along to the “High School Musical” hit “Breaking Free” from inside a car.

The actress performed the 2006 Disney song sans her original duet partner Zac Efron. Hudgens also busted out some dance moves while she crooned to the track.

The tune premiered in the first installation in the “High School Musical” franchise and was performed by Hudgens and Efron, who portrayed characters Gabriella Montez and Troy Bolton respectively.

“Vanessa, [y]ou exude love and good spirit in all you do!” he said. “You are effervescent and light up the world with your voice and your smile!!!”

Hudgens and Ortega reunited online with some of the original “High School Musical” cast members on April 16 to join the “Disney Family Singalong” event.

Ashley Tisdale, Corbin Bleu, Monique Coleman and Lucas Grabeel joined Hudgens and Ortega to perform “We’re All In This Together”, the movie’s uplifting anthem. Efron was absent from the virtual reunion.

Following her “High School Musical” years, Hudgens starred in other films such as the 2011 film “Beastly”, the 2018 Christmas romantic comedy “The Princess Switch” and the action film “Bad Boys for Life”, which was released in January last year. JB