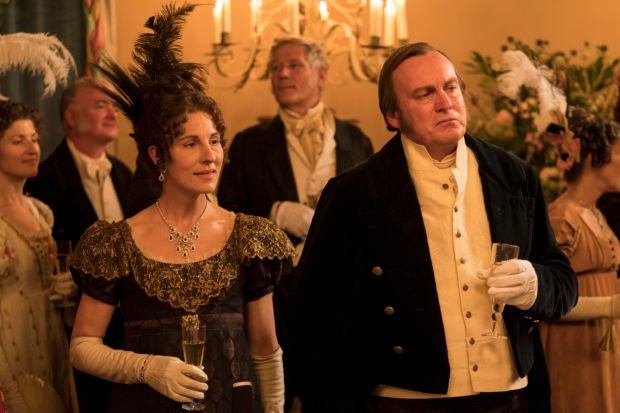 NEW YORK—Julian Fellowes’ latest addictive series about English social classes kicks off with a party. Mind you, not just any run-of-the mill, high-society bash. “Belgravia” on Epix starts with one of the most famous parties in history.

On June 15, 1815, the Duchess of Richmond threw a magnificent ball in Brussels for the Duke of Wellington. It just happened to coincide on the very day that Napoleon’s troops stormed into Belgium.

Only days later, British forces—including many of the very aristocratic soldiers attending the ball—would die battling Napoleon at Waterloo. “I liked the idea of starting the story off with that incredibly glamorous, incredibly tragic event,” says Fellowes, the man behind “Downtown Abbey.”

The story then jumps 25 years to Belgravia, a planned enclave of white townhouses with black railings in a tony part of London. It was a planned city-within-a-city, built on marshland. “It’s a part of London that has always fascinated me,” Fellowes says.

Two families—one aristocratic and the other rising from the middle class—find out that they are connected, for better or worse, by a baby conceived by the children of each family in those heady days before Waterloo.

The show stars Tamsin Greig and Harriet Walter as the matriarchs of the two families, two grandmothers defending the memories of their dead children and laying claim to the future of the grandchild whom they have in common.

“I wanted to have these two women who came from very different powerbase. It wasn’t that one was powerful and the other was not. It was they were both powerful, but they were powerful in different ways,” says Fellowes.

“I wanted them to have a common issue, a common interest, that would yoke them together against their will,” he adds. “And it seemed to me for them to share an illegitimate grandchild is a good way to do that.”

“Belgravia” is the latest drama from a writer who has created an award-winning career focusing on key turning points in English history—the early 1930s of “Gosford Park,” the end of the Georgian era in “Vanity Fair,” the early 1920s in “Downton Abbey” and, in a new series now streamable, the 1870s with “ The English Game.”

“Julian has such a passion for certain sections of history. He gets so involved in the details of each and is therefore such a good storyteller—creates such a compelling narrative—that you’re drawn through those slices of history,” says Greig, who plays the middle-class matriarch.

“Belgravia” first started life as a 2016 book by Fellowes, and he found it relatively easy to adapt his own 400-page novel into a six-part TV series. 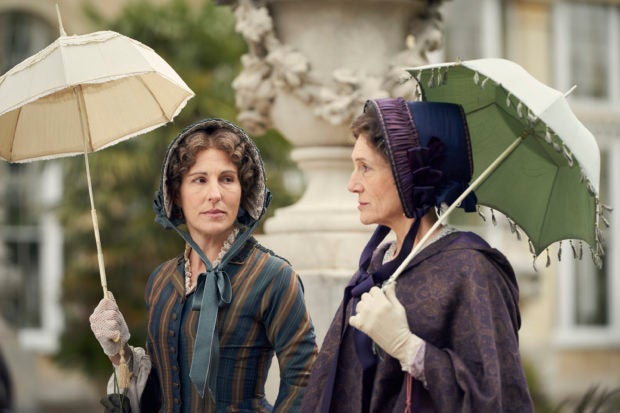 “By this stage of my life, I tend to write quite visually because so much of what I write is for television or a big screen or the stage or whatever,” he says. “And I sort of see these scenes in my head and so I write them in that way.”

Was Fellowes the screenwriter kind to Fellowes the book author? Not really, he admits. “I think you have to sort of forget that you wrote it actually. You have to look at it fairly ruthlessly for the characters that can be made better or the scenes that could be given a little extra frill.”

The series has plenty of touches familiar to fans of Fellowes, including duplicitous ladies’ maids, aristocratic arrogance, forbidden romances and grousing downstairs. But unlike “Downton Abbey,” which was set from 1912 to 1926, the world of 1840s “Belgravia” is not about aristocratic decay.

“This booming new middle class had arrived and suddenly they were making and buying and weaving and dealing in and trading in everything. And that seemed rather fun.”

Fellowes calls the time “one of the first periods of where the warning shots were fired across the bows of the old aristocracy.” By the later part of the century, the middle classes would be running the show.

Greig had never worked on a Fellowes project before and says she was instantly hooked by the script, especially his vast well of compassion for all his characters.

“Each one is very well mapped out and he doesn’t judge any of them. They’ve all got a reason for the things that they do,” she says. “He combines his passion for different moments in history with narratives that remind us that we’re human.” CL /ra