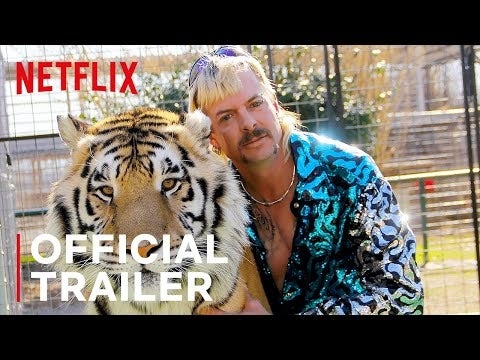 In what amounts to a phenomenal success, the documentary series “Tiger King” has become a breakout hit for Netflix, with ratings agency Nielsen Media Research reporting that it has been watched by 34.3 million viewers in the United States since its launch on the streaming platform 10 days ago.

On par with “Stranger Things”

It is a performance on par with records set by one of the streaming platform’s most successful shows to date, “Stranger Things.” In 2017, the second season of the science-fiction horror attracted an audience of 31.2 million in its first 10 days, and in 2019, the third season of “Stranger Things” was watched by 36.3 million following its launch, making it the most successful series ever to be shown on the streaming platform.

On March 20, the day of its release on the streaming platform, the documentary series “Tiger King” was watched by 280,000 viewers. A day later, it attracted an audience of 768,000, and then topped a million viewers after just three days, reports Nielsen. This success continued to grow, with the show reaching 3.39 million viewers on March 29. However, there may be more to this story, because these extraordinary figures, which have yet to be confirmed by Netflix, only include data for the US market, and only for the audience who tuned in to the show via connected televisions (not on mobile devices and PCs).

Comprising seven episodes, “Tiger King” tells the tale of Joe Maldonado-Passage, known as Joe Exotic, a 57-year-old who built an empire with a zoo, and a shady animal-breeding and -selling business. It is an incredible story that finally landed the larger-than-life character in prison for plotting to murder his sworn enemy Carole Baskin, the CEO of an animal sanctuary, who engaged in a legal battle against Joe Exotic that precipitated his bankruptcy.

According to Jeff Lowe, the current owner of the zoo that is the focus of the documentary, the streaming platform is preparing an additional episode for the series, which will be released shortly. CL /ra

‘Money Heist,’ ‘Tales from the Loop,’ ‘Killing Eve,’ ‘Never Have I Ever’ and ‘After Life’: Five not-to-be missed series this April

Read Next
Marvin Agustin’s sister narrates sorry plight of health workers abroad amid COVID-19
EDITORS' PICK
Metro Manila posts lowest temperature yet this ‘amihan’ season at 19°C
Acer starts the year off strong with the Aspire Vero National Geographic Edition
Over 3 Million worth of prizes to be won at Smart Padala’s SENDali Manalo Promo!
Gear up and get ready to play with Yamaha Mio Gear
DOH: 28,471 new COVID-19 cases in PH; active cases now 284,458
On Day 2 of implementation, gov’t says workers now exempt from ‘no vax, no ride’ policy
MOST READ
Lucky plants to grow in 2022
Derek Ramsay on being married to Ellen Adarna: ‘Gumaan ‘yung mundo ko’
Cristalle Belo on raising her kids in Australia: ‘We set limits’
Unvaccinated has rights but also has limits—DOJ
Don't miss out on the latest news and information.