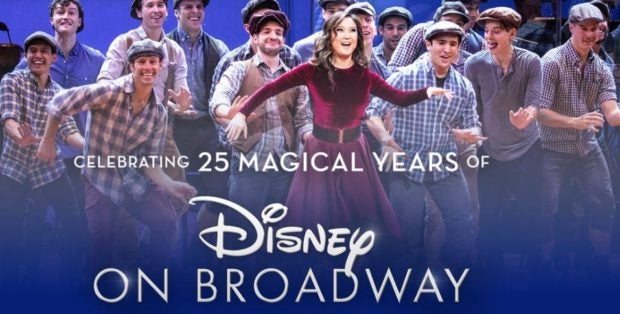 The anniversary concert “Celebrating 25 Magical Years of Disney on Broadway” will be streamed on April 13. Image: Courtesy of Broadway Cares and Disney via AFP Relaxnews

The one-night event was staged on Nov. 4, 2019, at the New Amsterdam Theatre to celebrate the silver anniversary of Disney’s arrival on Broadway. At the time, the benefit concert raised more than $570,000 for Broadway Cares/Equity Fights AIDS.

More than 20 Broadway producers have offered a $1-million challenge match to double the impact of donations to the emergency fund, which was launched back in March.

“Celebrating 25 Magical Years of Disney on Broadway” will be streamed on Monday, April 13, at 7 p.m. Eastern Standard Time on the official website of Broadway Cares, as well as on the organization’s YouTube channel and Facebook page.

Additionally, “Celebrating 25 Magical Years of Disney on Broadway” will also include the much-anticipated reunion of 18 Newsies from the show’s Broadway and national touring productions, as well as a performance from Broadway Inspirational Voices.

The concert will also be hosted by Ryan McCartan from his family’s basement, where he will conduct live guest interviews with Disney stars throughout the evening.

In other news, the Broadway League announced that the 41 Broadway theaters would remain closed at least through June 7.

Industry leaders had initially hoped that Broadway would re-open in mid-April, although the rapid spread of the coronavirus in the United States will likely put an early end to the 2019-2020 theater season.

Broadway theaters have been closed since March 12, potentially cutting off the 2020 Tony Awards eligibility of 16 productions that had been set to open this spring.

In reaction to the shutdown, the Tony Awards, originally scheduled for June 7, have been postponed to a later date to be announced once Broadway reopens. CL /ra