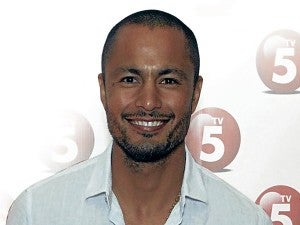 The recent string of box-office successes in Star Cinema’s “The Unkabogable Praybeyt Benjamin,” “No Other Woman” and “Corazon: Ang Unang Aswang” has undoubtedly elevated Derek Ramsay’s status as an actor. But his recent transfer to TV5 has left not a few people surprised, and critics wonder whether his decision was motivated by money.

Derek admitted that TV5 did offer him a “marginally” larger sum than ABS-CBN, but he claimed that what really won him over was the Kapatid network’s sports-oriented project lineup, which includes a hosting gig in “The Amazing Race Philippines.”

“TV5’s offer is close to my passion. I’ve always been vocal about my love for sports and traveling, and TV5 recognized that. It is not about the money,” he said during a recent press conference at the Boracay Hall of the Edsa Shangri-La Hotel.

The athletic actor, who will represent the Philippines in the coming Frisbee World Cup in Japan, will also be TV5’s ambassador to the 2012 Summer Olympics in London—“a huge honor” for the British-Filipino hunk.

“London’s my hometown. It’s also an opportunity for me to visit my family there, and to show Angelica [Panganiban] where I come from and where I went to school,” he said.

According to Espinosa, exploratory talks with Derek started in August last year.

Derek described the decision to leave ABS-CBN as a “long and grueling process” that involved multiple meetings with the network’s honchos. He revealed that ABS-CBN had a very enticing counteroffer that promised him, among other things, a film project with his dream leading lady, Angel Locsin.

But Derek said: “Ultimately, when I looked at the two offers, ’yung passion ko lumabas talaga rito sa TV5.  I was born for sports and I remain wired to it,” he concluded. “There was a different smile on my face at TV5’s offer! I felt like a little boy let loose in Disneyland!”

Quite expectedly, some fans didn’t approve of Derek’s career move and resorted to venting out their frustrations on the social networking site Twitter. Online bashers hurled insults at him, calling him “mukhang pera.”

Fortunately the positive comments far outweighed the negative ones, Derek said. He also felt relieved when most of the bashers apologized for their initial rant. “Criticism is part of life . . . and certainly of showbiz. You can’t please everybody, and I’m not about to try,” he said.

Espinosa came to Derek’s defense, saying there was nothing wrong with celebrities moving from one network to another. “At the end of the day, we have to respect the actor’s decision. Money is important, but it’s not everything,” he intoned.

But how true were the rumors that Derek’s deal with TV5 was worth P600 million?

“Would that it were true!” the 32-year-old actor said, cracking up.

Espinosa laughed, too. “That’s an exaggeration!” he exclaimed. “I wouldn’t say it was a small amount but it was nowhere near that figure!”

Derek took pains to make it clear that there was no bad blood between him and ABS-CBN. “I’ve proven my loyalty to Channel 2, and I think they know that. They said they appreciated the reasons for my decision.”

But Derek also recounted how “someone from ABS-CBN” had told him that moving to TV5 would spell the end of his career.

“That’s an opinion. I don’t subscribe to it,” he said. “I give my all in whatever I do and deliver the goods.”

No amount of doom-saying would faze him, Derek added. He said that his loved ones and his loyal fans give him the “strength and confidence to believe that I made the right decision.”

Read Next
Glamorous Star always falls for wrong guy
EDITORS' PICK
Duterte not keen on extending term — Palace
Get 80% OFF Ignite 2020 Cyber Tickets starting 28 September
Full operation of more sectors, businesses pressed to spur economy
We don’t want gov’t to fail, because it’s all of us who will suffer and die — Robredo
Smart poised to turn PH into ‘Smart 5G country’ with nationwide rollout
Water remains our saving grace right now
MOST READ
Fernandez: Velasco camp ‘betrayal’ pushes call to retain Cayetano as Speaker
Mayor Treñas tells Locsin: Iloilo City is much better than what you think
Palace: Some cities in Metro Manila eligible for MGCQ
Palace allays Robredo’s concerns on China-based pages
Don't miss out on the latest news and information.