Sharon Cuneta, KC Concepcion back on good terms after rift 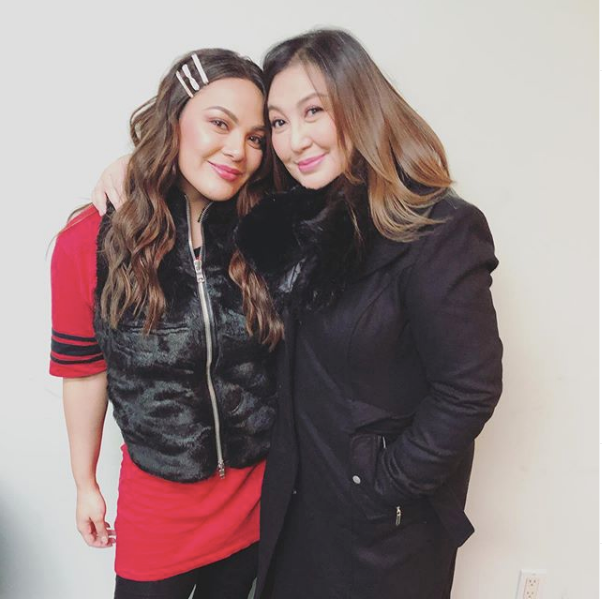 It seems celebrity mom and daughter Sharon Cuneta and KC Concepcion have made peace with each other after the Megastar revealed a rough patch in their relationship earlier this year.

“Baby#1 has a new YouTube channel. Hope you can all support her. #stillmybabynomatterwhat #unconditionally #iloveyounowandforever #onlyonemomsyforever,” she said.

Mom and daughter had a sweet exchange in the comments section. “Thank you, Mama,” said Concepcion.

“You are welcome. I love you no matter what. That will never change,” Cuneta replied.

“I love you too, Mama, no matter what,” said Concepcion.

“No matter what you do, I have taught you right from wrong and I will always trust in God Almighty in the way I raised you,” the seasoned actress said to her eldest child.

“I will always love you with all my heart, even if sometimes we cause each other pain. But the world may turn upside down and the one hand that won’t be letting go of yours even if she falls to her death is your Mama’s.”

Cuneta also opened up about what went wrong in their relationship after one follower, @acquistishoppe, observed that Cuneta was not vocal in her support for Concepcion studying gemology and launching her own line of bespoke jewelry, Avec Moi by Kristina.

The mom of four admitted that they had a rift when Concepcion launched Avec Moi in 2018.

(To be honest we had a rift during the launch of Avec Moi. She did not initially want others to learn that she was studying gemology in the States.)

She also stressed that she never wanted to miss her daughter’s school activities when she was young, but now she is not aware of what goes on in Concepcion’s life.

“She is very independent kasi but the downside of that is that minsan di ko alam ang nangyayari sa anak ko dahil di sya nagkukwento (sometimes I do not know what is happening with my daughter because she does not tell me),” she said.

“Now it will be better. Anak ko si KC. Walang puedeng mas may magmahal sa kanya nang higit sa akin (KC is my child. No one can love her more than I do),” she declared.

The Megastar said in a heartfelt message last January that she missed her daughter’s presence in the family. Concepcion did not make a public response to her mother’s plea to spend time with them.

Cuneta hinted at their strained relationship in subsequent Instagram posts, such as one wherein she shared a Bible verse on honoring one’s father and mother.

She came head to head with a commenter who blamed Cuneta’s absence in her daughter’s childhood for their relationship struggles.

Cuneta responded: “Nasan siya ngayon kundi ako nagtrabaho (Where would she be now if I did not work)? And I didn’t depend on my Dad and Mom except to take care of her while I was breaking my back and having no sleep to prepare for her future.”  /ra