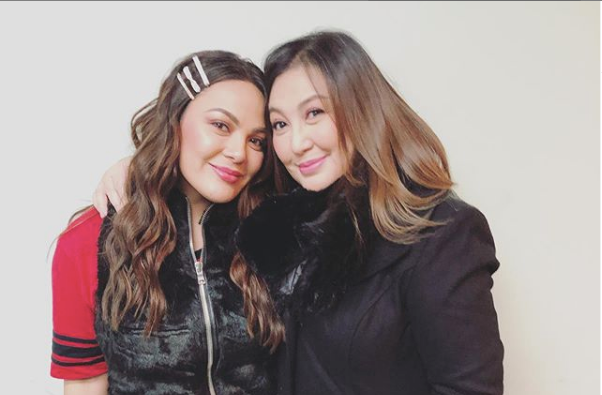 Megastar Sharon Cuneta defended herself after being accused of poor parenting toward eldest daughter KC Concepcion.

Cuneta was criticized through the comments section of her Instagram post yesterday, Feb. 3 by one anonymous user with the handle @highlands1553.

The actress’s post was on two Bible verses talking about family. “For our families,” Cuneta said of the passages, which were Deuteronomy 5:16 and Proverbs 11:29.

“Whoever brings ruin on their family will inherit only wind, and the fool will be servant to the wise,” read Proverbs 11:29.

“[You] shouldn’t be surprised at the kind of relationship (?) you have with your eldest daughter KC (I think she’s still your daughter, no?),” commented @highlands1553 earlier today, Feb. 4. “You weren’t around pretty much her growing up years because you were sleeping around … with your leading men and not so ‘leading men.'”

“Your Mom, KC’s Lola did a great job of raising her. If you don’t even like KC now, you should blame her upbringing on your Mom. But she turned out great so kudos to her Lola,” the Instagram commenter added.

The anonymous person also went on to claim that Concepcion must have tried to tell Cuneta that her “whore-like behavior when she was growing up” helped her daughter avoid getting pregnant at 18 years old.

“I noticed you take pride in saying you never spoke ill of her Dad, how about doing the same and say something nice about your daughter, stop being so critical, stop shaming her, make comparisons with your other children, stop being so dramatic (the awards seasons are over) stop being a kiss-ass to other people, they are all your friends, we get it! I just couldn’t (sic) stand you anymore!” the comment ended.

Cuneta refuted the claims earlier today, saying she was busy working back then so she could provide for her daughter.

“I worked to put food on our table because no one was helping me. My Mom and Dad helped raise her because I had to work. Parang mga OFW kahit ayaw lumayo sa anak nagtatrabaho (Just like overseas Filipino workers who have to leave their children to work even if they do not want to),” Cuneta stressed.

“Nasan siya ngayon kundi ako nagtrabaho (Where will she be now if I did not work)? And I didn’t depend on my Dad and Mom except to take care of her while I was breaking my back and having no sleep to prepare for her future,” she added.

Cuneta then went on to say that the anonymous commenter is stupid if he or she thinks that the actress is “[kissing] other people’s asses” by posting about her celebrity friends.

“Am retiring soon. I NEVER even when [I] was just starting have to do that. Now pa?!”

“At madami na akong awards sa bawat medium (And I have several awards in each medium),” she said.

“You can’t stand me but you can’t leave me alone when you have no idea what’s going on. And you better thank God I’m not talking about what really happened,” she added.

Cuneta then ended her comment stating that the anonymous critic and his or her “fake accounts” should get a job and a life,” saying: “Ayan tuloy, parang ako kinacareer mo (Look what happened, I’m the one you are focusing on).”

A fan with the handle @bluheart18 meanwhile defended Cuneta from the criticism, noting that no matter who is right or wrong in the rumored feud, people should respect them and let them heal on their own.

“So gabby is the hero now? Take your daughter to dinner and all your shortcomings will be forgotten?” @bluheart18 said, seemingly referring to Concepcion and her father Gabby’s dinner date on Feb. 2.

“One hurtful and heartfelt post from the mother and all her sacrifices [and hard work] are suddenly nothing. Just wow! How fair is that?” she added.

The commenter said that even though people do not really know what is happening between them, the public should “stop painting [Concepcion] as the victim” as she is “no saint.”

“Regardless of who is right and who is wrong, at the end of the day they are family. Let them heal and patch things up. If @itskcconcepcion is really the good daughter you say she is then bashing and shaming her mom [won’t] make her happy,” she stressed.

“No daughter will stand and watch as her [so-called] followers disrespect her own mother. Unconditional love is a [two-way] street, remember that,” she stressed.

Cuneta seemed to have agreed with the sentiments, replying with a simple “Amen to that.”

Cuneta earlier this month asked her daughter to “come back” to her family and stop trying to distance herself from them following Concepcion’s birthday greeting to Cuneta on Instagram. NVG

Sharon Cuneta asks daughter KC Concepcion: Come back to us