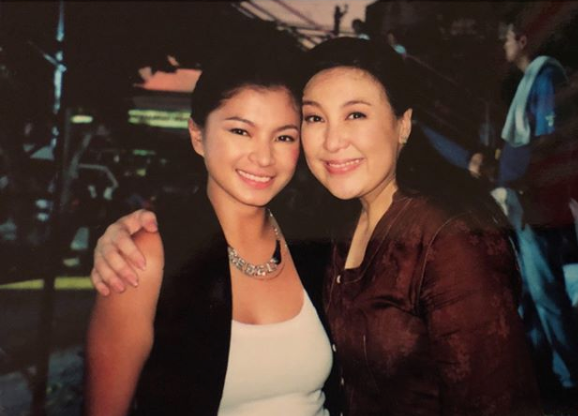 Sharon Cuneta and Angel Locsin are some of the country’s biggest celebrities in their own rights, but the two cannot help but be fans of each other. In a moment of reminiscence, Cuneta gave an example of just how Locsin shows her respect, and the Megastar is undeniably grateful.

Cuneta showed fans a throwback picture of them together during Locsin’s days as “Darna”, which was accompanied by an appreciation message on Instagram earlier today, Feb. 4.

“This was taken in 2005 or 2006. Angel was still Darna on [GMA 7]. I was shooting my [McDonald’s] commercial with Kakie who was so obsessed with Darna then,” Cuneta said.

A younger Cuneta wraps her arm around Locsin, who was around 20 years old at the time, as they smile and pose in the photo.

(No matter where she is in the big ABS-CBN complex, whenever she finds out I am somewhere in there, she will come to find me just to say “hello.”)

She then went on to tell the story of how Locsin went out of her way to put Cuneta in front of other stars during ABS-CBN’s last Christmas special.

During the special’s finale, Cuneta said she, along with fellow stars Angelica Panganiban and Ogie Alcasid, decided to go to the stage a bit later than the other stars because they did not want to go along with Liza Soberano.

(I could not stop laughing because we did not want to go along with the extremely beautiful Liza Soberano. She may go first or last because her beauty seems like it surpasses that of a Miss Universe!)

When they got to the stage, Cuneta said Locsin did not want her to be at the back where she would be blocked by the other Kapamilya celebrities.

(I said it was okay, it is kind of embarrassing to pass through all the other stars just to put myself in front. She did not let me! She said I should be in front!)

“Napakabuti ng batang ito. Paano mo naman di mamahalin (This kid is so kind. How can you not love her)?” Cuneta added. “She didn’t have to do it but she did anyway, forgetting that she is THE Angel Locsin. Maraming salamat sa respeto, Angel. Love kita (Thank you for the respect, Angel. I love you)!”

Locsin meanwhile replied to Cuneta’s post, also showing her gratitude “for being a wonderful example” for them in the industry. 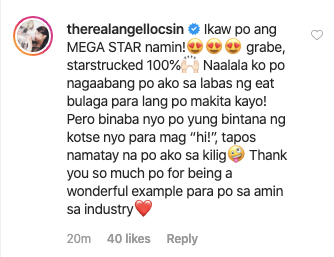 Locsin also recalled how she used to wait for Cuneta after an episode of GMA’s variety show “Eat Bulaga!” just to see the Megastar.

(I still remember when I used to wait outside “Eat Bulaga!” just to see you. You even rolled down your car window just to say ‘hi!’ and I died from being so starstruck.)

Locsin used to play the role of superhero Darna in GMA’s show of the same name back in 2005. It was an adaptation of Mars Ravelo’s fictional character from his comics. NVG