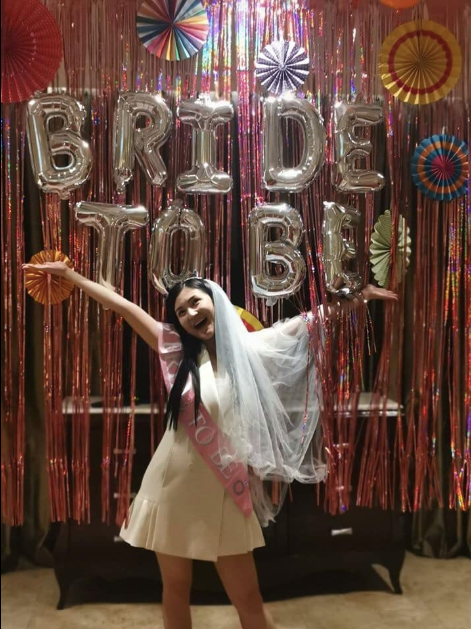 Before actress Sheena Halili ties the knot with her fiancé, her friends and family in the industry surprised her with a “grand bachelorette party.” Halili’s party was attended by actors such as Maine Mendoza, Chariz Solomon and Ria Atayde, as well as agents and producers from Halili’s home media network GMA.

The actress was out with her soon-to-be-husband Jeron Manzanero watching a live musical performance when a group dressed in pink approached them. While Manzareno and Halili were enjoying a beer and snacks, the group yelled out “surprise!” as seen on Halili’s post yesterday Feb. 3.

Halili said that at first, she thought they were fans asking for a photo. She then recognized her friends such as actresses Ria Atayde and Chariz Solomon, as well as her cousin Katrina Halili. Sheena expressed her joy about the surprise since all her friends claimed to be out of town or unavailable.

“Well, sinusubukan kong gumawa ng usapan para hindi ako maiyak sa gulat pero bumigay rin ako (I tried to make conversation to stop from crying because I was shocked, but I could not help it),” she said in her post. The actress used the hashtag #HulingHalili for her party.

She was also delighted to see her agents and her matron of honor Rich Asuncion included in the lineup. She mentioned that her second surprise guests were not able to join the welcoming party because they were busy decorating.

“[H]indi ko rin alam paano nila nabuo ito dahil busy silang lahat (I do not know how they managed to put it together since they are all busy)!” she added.

The plan was apparently approved by Manzanero; her fiancé even chose her outfit for that night to match with the party’s dress code. According to Sheena, she was out of the loop on the surprise and was led to believe that they were going out with Manzanero’s friends.

Sheena’s surprise bachelorette party last Saturday, Feb. 1 was also attended by some of GMA Network’s producers who she has become close friends with. She uploaded some photos with her guests, as well as a snippet of their surprise, on her Instagram account yesterday.

She got greeted by the door with party poppers and some “bride to be” inflatable balloons. The room was also decorated with multi-colored lanterns on the ceiling and a glittery background set-up in front of a curtained window. Sheena got another surprise guest, Maine Mendoza, who attended even if she was busy for a shoot the next day. Mendoza also gave Sheena and her guests cosmetics gift packs.

Halili expressed her love for her friends on Instagram and said, “Pa-huling hirit nila para sa #HulingHalili (Their last hurrah for #HulingHalili).” NVG