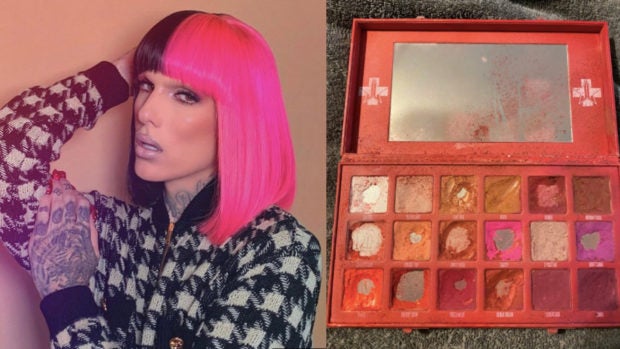 Internet celebrity and cosmetics line owner Jeffree Star offered to send a new eyeshadow palette to a mom who had some of her makeup damaged after her 3-year-old played with it.

The mom named Julie said that instead of getting angry or “beating” her child, she talked to her daughter who apologized. They then cleaned the mess on the mattress together as best as they could, as seen on @MUAdifiziert’s Twitter post yesterday, March 2.

My 3 year old got into my @JeffreeStar #bloodsugar palette while I was at work today. We cleaned it up the best we could.

Guess what I didn’t do? Touch her. I didn’t scream, didn’t beat, didn’t “pop” or spank. I talked with her, she apologized, and helped me clean her mess up. pic.twitter.com/mrnbS9HNb1

The mom’s post came a few days after a YouTube vlogger, Michael Grace, shared with her viewers that she “beat up” her 2-year-old child for destroying two of her eyeshadow palettes in a now-deleted video on the streaming platform. Some internet users have apparently been urging people who know Grace to report her to Child Protection Services (CPS) after the video.

Others were able to save a copy of Grace’s video last week; it is now available again online, as seen on Lauren Edson‘s YouTube channel on Feb. 27.

Grace was apparently lamenting about a Jeffree Star Cosmetics’ alien palette which her child “ruined.” The vlogger was furious because she claimed that she could not afford a replacement palette.

“My hand hurts because I just beat the crap out of her,” Grace said on the video while her toddler could be heard sobbing in the background. Grace added that she treated and protected her makeup like it was “her child.”

Star did not respond to the video after the issue circulated around the internet last week. However, he did reply to @MUAdifiziert on Twitter in what appears to be a reward for her good parenting.

“Hi parenting, how are ya?” Star said yesterday. “Please DM me your address so I can send you a new palette! I’d send you a new mattress too but I don’t know how firm you like it.”

Hi parenting, how are ya? ❤️ Please DM me your address so I can send you a new palette! I’d send you a new mattress too but I don’t know how firm you like it 🩸 https://t.co/ZoXhbPjJnq

Julie narrated how her 3-year-old got her blood sugar palette while she was off at work. The mom showed powdered red, orange, pink and brown pigments left on a bed mattress while most of the shades in her makeup palette got too damaged to be used.

Without mentioning Grace’s name, the Twitter user appeared to be responding to the issue by sharing some philosophies she lives by as a parent.

“If your kids are old enough to understand reason, then reason with them,” she said. “If they’re not, then they won’t know why you’re hitting them.”

What I live by:

If your kids are old enough to understand reason, then reason with them. If they’re not, then they won’t know why you’re hitting them.

Don’t raise your kids thinking abuse = respect, because no one wants their kids ending up in abusive relationships 1/

She added, “Don’t raise your kids thinking abuse = respect, because no one wants their kids ending up in abusive relationships.” JB

Makeup-free Rihanna won’t let her pimple get bashed: ‘Let her have her shine’