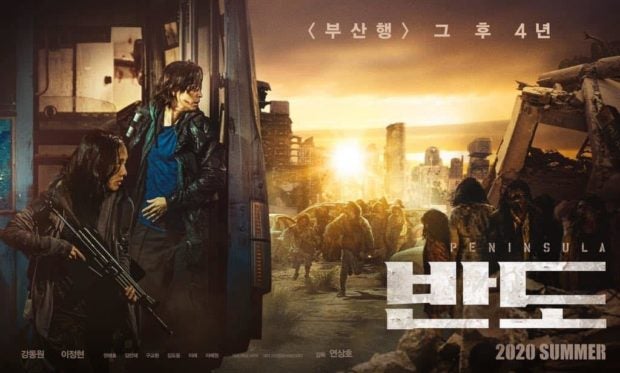 One of the first two official posters of “Train to Busan” sequel “Peninsula” (Image: Facebook/@cinemabravo)

“Peninsula,” the much-awaited follow-up to hit 2016 zombie flick “Train to Busan,” has finally revealed its official posters ahead of its release this summer.

The sequel to the South Korean horror blockbuster is set to pick up also four years after the events of the first movie, which left fans quite heartbroken yet hopeful by its end.

The official posters of “Peninsula” were shared by Philippine film website Cinema Bravo on its Facebook page yesterday, Feb. 28.

Posted by CinemaBravo on Friday, February 28, 2020

The first poster shows an unidentified character walking through the rubbles of an abandoned port surrounded by zombies. In the second, Kang Dong Won’s Jung Suk and Lee Jung Hyun’s Min Jung can be seen hiding behind a vehicle as a massive horde of zombies charges toward them.

The first movie told the story of single father Seok-woo (Gong Yoo) and his daughter Su-an (Kim Su-an) who boarded a train to Busan to celebrate the latter’s birthday with her mother. Their commute met an unexpected turn of events, however, as a zombie outbreak erupted in the Korean peninsula.  /ra