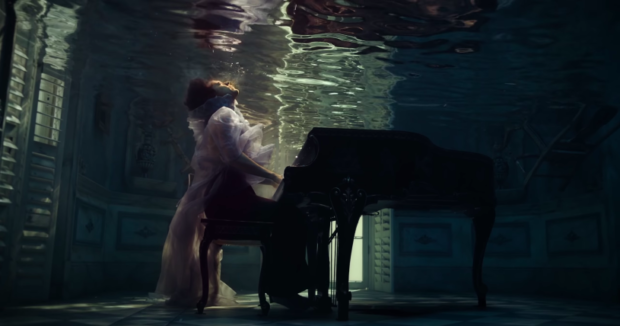 Harry Styles continues to promote his new album with the new video for “Falling.” Image: screengrab from YouTube/Harry Styles

The British vocalist has now unveiled the accompanying visual for the emotional ballad, which was directed by Grammy Award-winning filmmaker and frequent collaborator Dave Meyers.

The cinematic video opens on Styles lost in his thoughts as he contemplates a glass of brown liquor sitting atop a grand piano.

The former One Direction member, clad in a romantic lilac blouse and salmon-colored pants, performs “Falling” while the room starts to fill with water spilling from the instrument.

“Falling” is the third cut from “Fine Lines” to receive an accompanying video, following the previously issued “Lights Up” and “Adore You.”

Speaking to Apple Music’s Zane Lowe, Styles opened up about the inspiration behind the heartfelt ballad that he wrote in 20 minutes after getting out of the shower.

“The chorus says like ‘What am I now? Am I someone I don’t want around?’ – it was a big moment where I was kind of asking myself – ‘What am I doing?’ I kind of started to feel threads of where I could see myself becoming someone that I didn’t want to be,” he explained.

After attending several talk shows to promote “Fine Lines,” Styles will soon hit the road in support of his sophomore studio album.

The North American leg of the “Love on Tour” will kick off on June 26 in Philadelphia, Pennsylvania, where he will be accompanied by Jenny Lewis and Koffee.

Much to fans’ surprise, Styles recently announced that he will be hosting two nights of Halloween shows with Orville Perville next fall.

The event, playfully dubbed “Harryween,” will be held on Oct. 30 and 31 at New York City’s Madison Square Garden, with tickets going on sale on March 6. CL /ra