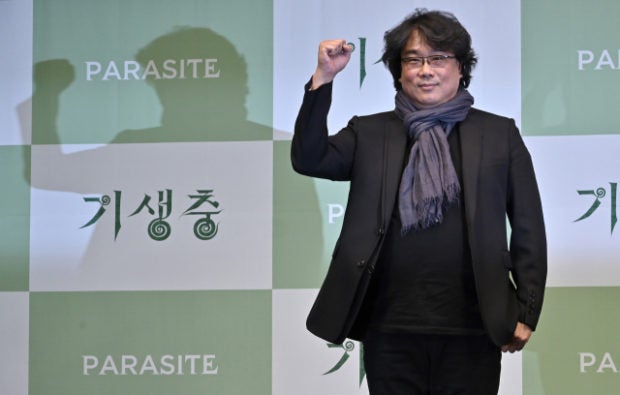 Watching a black-and-white re-release of his multi-Oscar-winning movie “Parasite” will give viewers a “different” and “strange” experience, director Bong Joon-ho said Wednesday ahead of the new version opening next week.

The director has always had a fondness for monochrome films, saying they give viewers a more intimate visual experience.

“When the colors are gone, you can focus more on the actors’ facial expressions and their eyes” and nuanced details, Bong told reporters in Seoul after his triumphant return from the United States.

The film’s historic Best Picture Oscar — the first-ever for a non-English-language movie — and three other statuettes, Best Director, Best International Feature and Best Original Screenplay, have created huge excitement in his home country, whose cultural output has gained popularity around the world.

But Bong said he hoped “Parasite” would be remembered for its content as much as its accolades.

The movie is a dark satire tale about the widening gap between rich and poor, following a poor family infiltrating a wealthy household.

All unemployed at the start of the story, the poor family members live in a dingy, roach-infested basement flat whose damp odor clings to them beyond its confines.

The black-and-white version, which Bong created along with cinematographer Hong Kyung-pyo, is set to be released in South Korean theaters next week, becoming the director’s second film to be rendered into monochrome after his 2009 thriller “Mother”.

It was shown at an international film festival last month, when Bong said a viewer told him: “The black-and-white version makes the odor in the film feel more real.”

“I’ve always admired classical movies — there used to be a time period where all movies were made in black-and-white,” he said.

“I’ve been curious about what the movie would have looked like if I were living in the 1930s.”

Distributors had mounted an intense promotional campaign ahead of the Academy Awards, Bong said, involving at least 600 media interviews and 100 question-and-answer sessions — at one point giving actor Song Kang-ho nosebleeds from exhaustion. NVG