Josh Radnor: ‘I feel I’m a better actor after having done ‘Hunters” 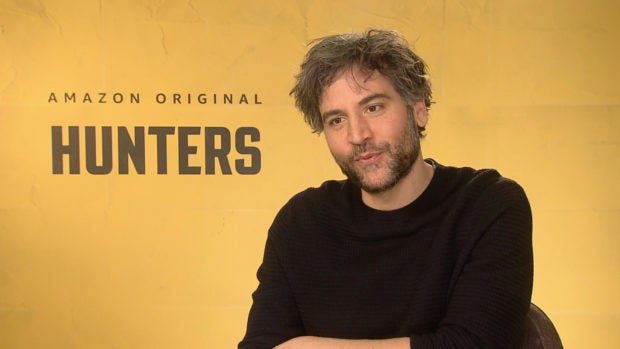 Best known for his role as Ted Mosby in the nine seasons of “How I Met Your Mother”, Josh Radnor is an actor, director, author, and also a musician.

At a time when he has just released “Outside In”, a new single from the forthcoming second album by his band Radnor & Lee, the American actor is also in the news for his role in “Hunters”, Amazon Prime Video’s latest series, which was released on Feb. 21.

Telling the tale of a hunt for Nazis in 1970s New York, the new series offers black humor, gory violence and features Al Pacino at the top of his game. Josh Radnor was in Paris on Feb. 11, to talk about his role in the new show, which he simply could not turn down.

What was your reaction when you first read the script of “Hunters” and what convinced you to accept the part?

“The description of it, you know a movie star in the 1970s who hunts Nazis… I thought what’s not to like about that? There was such a strange mix of elements and such a funny but ultimately serious character in a world with such a fascinating mashup of tones. It was a very serious show but it also had lighter moments. It was horrifying but also inspiring, all at the same time. It just felt like something I had never seen before. It felt new.

The most interesting work to me is when someone is creating their own world. David [Weil, the series creator (Editor’s note)] is so smart, and the genesis of the story was so personal. When you read something like that, you just have to go with your instinct because you can only try to imagine what it might be like. And when I saw the really high-level people getting involved in the project. I didn’t have to make a pros and cons list. I knew I just wanted to do it.”

How did you approach your role as Lonny Flash and to what extent were you able to make the character your own?

“It’s not like I knew who he was exactly from the moment that the cameras started rolling. Once I got the look of him, the facial hair, the wardrobe, the jewelry and everything, I understood something about a person who dressed that way, a person who needed their sexuality and their anger always on the surface. So that was what helped me initially. But the more I played him, the more I started to understand his insecurity, his vulnerability, what made him tick, where his strengths were, and what made him feel alive in the world, all of those things. You learn that as you go. It was a fascinating journey.

I can tell when I’m right in a character, because I start to care about him. I almost want to protect him. And when someone is cruel to him, it hurts. There is a separation between fact and fiction, but there is also a moment when you do start to feel ownership of a character and a need to be protective. Even if he’s doing something idiotic, you still want your character to be okay and you still need to understand why he’s behaving that way.”

What was it like to work with an icon like Al Pacino? Did you pick up some advice from him?

“No direct advice, it was more like osmosis. I learned from just being around him. I feel I am a better actor after having done ‘Hunters’. That would be true no matter what, because six months of acting is six more months of experience. But when you work with an actor of that caliber and that level of commitment, you can see how he makes a scene burn bright. It was great to demystify him, to see him as a real person, and as an artist working at the highest level. He does the same thing as I do, but he just does it better than everyone else. I found the whole experience of working with him very inspiring.”

What do you think about the trend for exploring political totalitarianism through television, especially in the run-up to a presidential election in the United States?

“I think that acting and the theater, and any sort of narrative or storytelling, is always a means of engaging with the world. It allows us to comment on it, or as Shakespeare said ‘hold the mirror up to nature.’

I do think that the marginalization, dehumanization and demonization of groups is a perennial human problem, and we need storytellers who engage with the world to shine a light on these things. Otherwise they might not be talked about as loudly, and with as much authority.”

What is your next movie?

“We will have to see. I mean it struck me that it has been eight years since my last movie [‘Love and Other Lessons’ (Editor’s note)]. I act, I love directing and I’ve also become a musician. I have too many careers going, so it is actually really hard to find the time you need to direct a movie.” IB/NVG