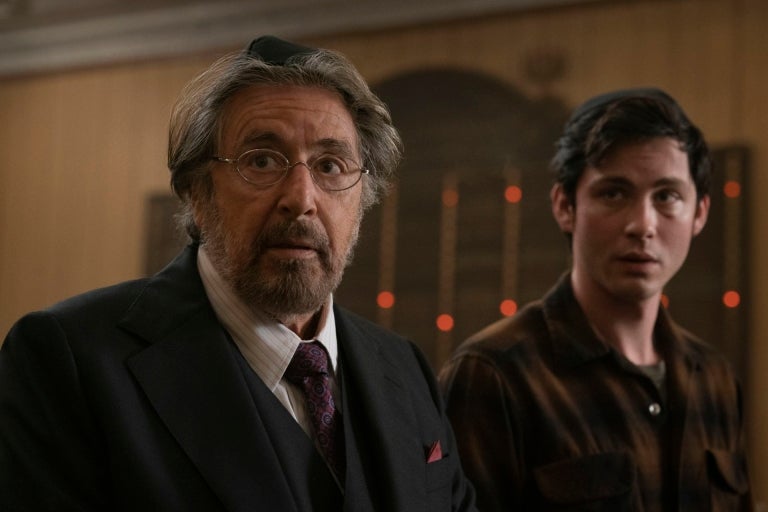 The series “Hunters” has all the ingredients to be the latest Amazon success. Created by David Weil and produced by Jordan Peele, the hunt for Nazis in 1970s New York benefits from the combined talents of Al Pacino, Logan Lerman, and Josh Radnor.

Al Pacino, a Nazi hunt, black humor and gory violence whipped into a daring mix. With “Hunters”, Amazon Prime Video has embarked on a risk-laden challenge, which involves telling a fictional story that is based on the history of WWII. “The authors worked with associations and journalists. […] It was vital for David [Weil, the creator of the series (Editor’s note)] for it to be based on historical fact”, explains Josh Radnor, on the occasion of his visit to Paris for a preview of the series last Feb. 11.

“Hunters” tells of a secret group that has come together to hunt down Nazis who have succeeded in landing in the United States. Embarked on this quest, the hunters discover that the highest echelons of the country have been infiltrated by war criminals who are working to create a Fourth Reich. In this story of revenge against a backdrop of personal and universal justice, some of the scenes are occasionally ultra-violent in a manner reminiscent of Tarantino. “There are flashbacks to the concentration camp that are the most grisly scenes I’ve ever seen”, points out Josh Radnor.

What amounted to a challenge for the streaming platform was viewed as a godsend by the actors.

“I didn’t hesitate for a second”, says Josh Radnor on the occasion of the preview of “Hunters” at the Royal Monceau in Paris. “I think that as an actor, if someone offers you a role as a 1970s movie star who kills Nazis with Al Pacino, you just have to say yes.”

In “Hunters”, Josh Radnor, who is best-known for his performance as Ted Mosby in the nine seasons of “How I Met Your Mother”, plays the role of Lonny Flash, a down-at-heel actor by day and a Nazi hunter by night.

“They gave me plenty of space to improvise. […] When David saw that I had found a way of talking about Lonny, he would sometimes tell me +just say what you want there+. It was great”, explains Radnor.

The first season comprises ten episodes, which has been released on the streaming platform last Friday, Feb. 21. Unlike the hour-long shows that follow it, the first episode has a feature-length runtime of 90-minutes, which goes by in a flash thanks to meticulous direction, a pop-art spirit and ultra-violent scenes. JB

At 79, Al Pacino reflects on his life and career