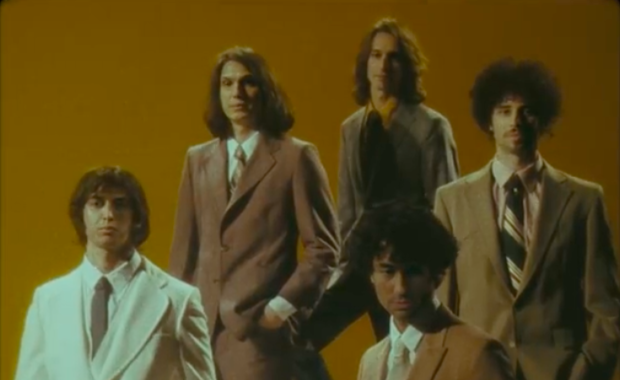 The Strokes in the music video of “Bad Decisions” (Image: screenshot from YouTube.com/The Strokes)

The Strokes has now unveiled the studio version of “Bad Decisions,” in which the rockers take melodic inspiration from Billy Idol’s 1981 hit “Dancing with Melody.”

“Dropped down the lights, I’m sitting with you / Moscow, 1972 / Always singin’ in my sleep / I will leave it in my dreams,” Julian Casablancas sings in the Rick Rubin-produced cut.

“Bad Decisions” arrived alongside a sepia-toned visual directed by Andrew Donoho, in which Casablancas and his bandmates are on sale for $5 a month in a retro infomercial.

The video takes a darker turn when the musicians began to implode, causing a mayhem on the set of the television special.

“Bad Decisions” arrived just a week after the previously issued “At the Door,” with both singles slated to appear in The Strokes’ forthcoming new album.

Details about “The New Abnormal” are still scarce to this date, although it will mark the band’s sixth studio opus.

The long-awaited follow-up to 2013’s “Comedown Machine” was overseen by veteran producer Rick Rubin, while the album’s cover features a reproduction of “Bird on Money” by Jean-Michel Basquiat.

While they are gearing toward the release of “The New Abnormal,” The Strokes will perform three North American shows next March in Vancouver, Seattle and Los Angeles with Alvvays and King Princess as support.

The band will also perform at the 2020 edition of Primavera Sound, which will take place between June 1 and 6 in Barcelona, Spain. IB /ra