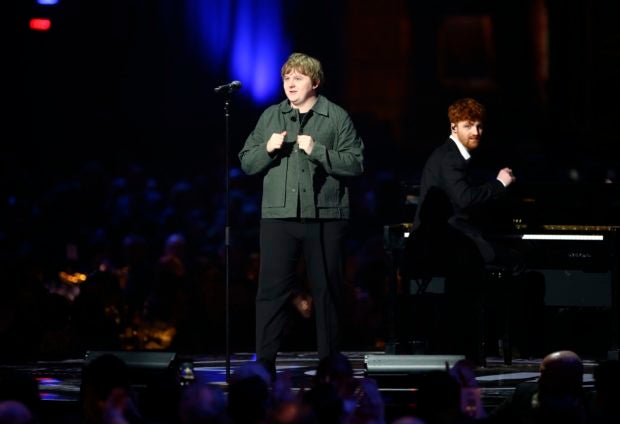 Billie Eilish and Tyler the Creator were among the international winners at the awards, which have been criticized for a dearth of female nominees.

The 21-year-old south Londoner Dave won the coveted album of the year prize for the self-reflective “Psychodrama”.

Accepting the trophy, he gave a shout out to other young people from Britain’s cities with big aspirations.

“All my young kings and queens that are chasing their dreams, I’m no different from you,” he said.

Capaldi’s U.K. and United States chart-topper “Someone You Loved” was named song of the year, and Capaldi also won the best new artist prize during the ceremony at London’s O2 Arena,

Mabel said on the red carpet that it was “such a lovely sort of full-circle moment” to perform at the Brits 30 years after her mother did the same.

Previously an unpredictable and sometimes ramshackle event, the Brits have been refashioned in recent years as a slick showcase for British talent. This year organizers culled several awards categories to make more room for performances, including turns by Capaldi, Mabel and Harry Styles.

Lizzo got the audience worked up with her Grammy-winning anthem “Truth Hurts”, while Stormzy brought on Nigerian singer Burna Boy and scores of extras for a medley of hits.

Dave held the audience rapt with a piano-accompanied, slow-burning rendition of “Black” in which he accused Prime Minister Boris Johnson of racism, contrasted “how the news treats Kate versus how they treated Meghan” and paid homage to Jack Merritt, the young prisoner-rehabilitation worker killed in a knife attack near London Bridge last year by a radicalized ex-inmate he had been helping.

Comedian Jack Whitehall, the evening’s host, quipped that the 18-year-old superstar was “the only teenager in the world who makes Greta Thunberg look lazy.”

Eilish, who has spoken off her mental health struggles, told the audience: “I have felt very hated recently.”

“When I was on the stage and I saw you guys all smiling at me it genuinely made me want to cry and I want to cry now,” she said.

Eilish gave the first public performance of her James Bond theme song “No Time to Die” alongside her brother and co-writer, Finneas O’Connell, composer Hans Zimmer and Johnny Marr, former guitarist for The Smiths.

Marr said the choice of Eilish to write and perform the theme to the next Bond thriller was “a very cool and smart choice.”

“It would have been very easy to do something that was very obvious. I think, with Bond,” he said.

Singer Celeste was named rising star, Foals was declared band of the year, and the award for international male solo artist went to Tyler the Creator. He sardonically thanked former Prime Minister Theresa May for banning him from entering Britain five years ago.

The awards have been criticized over the years for failing to reflect the diversity of British music and being slow to embrace the emergence of genres including home-grown British grime and hip-hop.

In 2017, the academy of more than 1,000 music industry professionals that chooses Brits winners was expanded in an attempt to make it more gender-balanced and diverse. Last year female nominees outnumbered men for only the second time in the event’s 40-year history.

But this year only four nominations out of a possible 25 in categories that are not gender-specific feature women. No female performers were included on the shortlists for best group or album of the year. RGA

Bad Bunny, Khalid to perform in Apple Music’s ‘Up Next’ tour