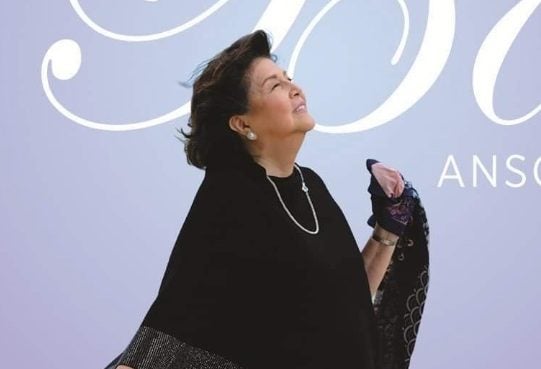 I immensely enjoyed the birthday bash of Tita Boots Anson-Roa Rodrigo. The fête was aptly dubbed “Fully Alive at 75… Vibrant in Mind, Body and Spirit.”

As celebs age, most of them resort to botox and stem cell treatment. But not Tita Boots. The beauty of her heart makes the show biz icon glow from within. If Jennifer Lopez has redefined what being 50 is in her Superbowl performance, Tita Boots defies time at 75. Not just with her looks, but also with her joie de vivre, which she spreads around so well. Boots-cha by golly wow!

Here’s my chat with Tita Boots:

Being busy living for others; that deflects my woes, frustrations and pains. I always say God will take care of them.

What’s your advice to widows who are wary of getting married again?

My second marriage was brought to me via angel’s wings. The first setup of my siblings/cousins and King’s siblings and best friend in 2010 was a failure. We were not yet ready as widow and widower. But our matchmakers were relentless, and so was King as suitor later on.

Do not pursue the matter of a second marriage. Let it find you. Or, if you can find somebody like King Rodrigo, go for it.

Among all of King’s poems for you, which one is your fave?

It has been “over the hump” since the last five years, thanks to the Metro Manila Film Festival’s subsidy and its increasing number of supporters. With its present management, we have continuously outsourced funds, cut costs and enhanced employees’ and beneficiaries’ benefits and have seemingly won the trust of benefactors.

For Welfare and Film Education program sustainability, Mowelfund has adopted a property development program and is soon transferring to a new building.

What do you miss about show biz back in the day?

I miss the cohesiveness in the film industry when producers and filmmakers were more dynamically involved in both their businesses and corporate social responsibility; when social media did not usurp the privacy of the stars; when stars, in turn, were not as beholden to social media as their stronghold to popularity and box-office appeal.

What makes you mad?

Liars, especially those who successfully pull the wool over people’s eyes. I sometimes wonder what their comeuppance will be. I dare not wish it.

What were your musings as you turned 75?

Simple wishes: To retire as president of Mowelfund soon, but continue to serve its board; finish my memoir; have more time to sleep, and interact with family members; see more movies; watch more TV; read more books; continue with my advocacies; learn how to plant; play the piano again, if my arthritic fingers will allow; go back to theater and do “Bernarda Alba” and “La Voix Humaine”; do antiheroine and character roles.

What are you most proud of?

That King and my children are proud of me. That I am 75 and don’t look it; albeit untouched by science and technology.

If your life story would be made into a movie, what do you want the title to be?

“She Lived with Her Boots On.” Seriously, “Serviam,” meaning “I Serve.”

How would you want to be remembered?

Not as the “perfect mother and wife” I have been typecast as, but as “the one who always tried.”

I have fond memories of my stint in ABS-CBN’s defunct shows, “Magandang Umaga Bayan,” “Showbiz Lingo,” “The Buzz” and in dzMM’s ‘Chismax.’ So my heart goes out to my colleagues in the beleaguered network.

As of press time, there’s still no sign of Congress tackling the franchise renewal of ABS-CBN. Kapamilya celebrities and employees are in limbo. It will be hard for many Filipinos, as well, because the closure of the network means its public service work will also come to a halt.

That is why we were stunned when the Solicitor General filed a petition with the Supreme Court, which aims to put ABS-CBN out of business. It’s unimaginable not to have a network that has mounted massive relief operations in various calamity-stricken areas. Aside from being an entertainment and news source, the Kapamilya network has always been a “hope provider.”

Read Next
Romance series provides ‘therapy,’ ‘catharsis’ to its target audience
EDITORS' PICK
Quick chat with Nicole Andersson: ‘You really don’t need much to be happy’
IATF to LGUs: Issue ordinances vs attacks on frontliners, COVID-19 patients
Diokno to Duterte: OK to make fun of buck tooth, but focus on people’s needs first
Nograles: Cabinet members to donate 75% of monthly salary to aid COVID-19 fight
10 Filipinos positive for COVID-19 in UK, 7 in Ireland — envoy
Robredo spox thanks Duterte for defending VP’s efforts vs COVID-19
MOST READ
Gov’t mulling quarantine period extension of 15-20 more days
Coronavirus hotbed Rizal to shut borders on April 6
ADB warns PH against prolonged lockdown
Sotto on Isko Moreno’s call: We do our job without the media following our every move
Don't miss out on the latest news and information.

Village frontliner dies after ambulance with pregnant onboard crashes