WATCH: Pitbull and Blake Shelton collaborate in ‘Get Ready’ 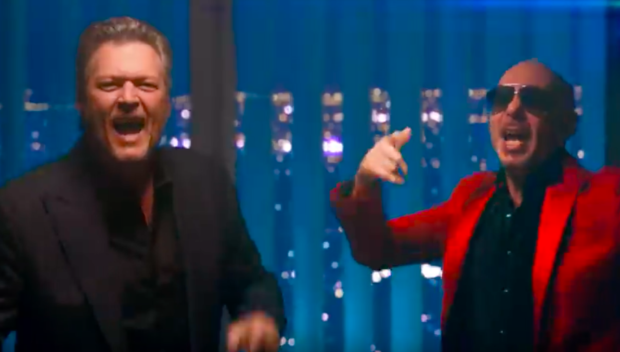 Blake Shelton and Pitbull in “Get Ready”. Image: screengrab from YouTube/Pitbull

Pitbull recruited country superstar and “The Voice” coach Blake Shelton for his latest party banger, which appears on his recently-released “Libertad 548” album.

The upbeat single notably features a sample from the 1930s classic “Black Betty”, which was popularized by American rock band Ram Jam in 1977.

Pitbull and Shelton have now unveiled the accompanying music video for “Get Ready”, in which the pair is seen simultaneously partying with a bevy of women at the Hard Rock Hotel in Florida and at a ranch in Nashville, Tennessee.

In a newly-released behind-the-scenes video, Mr. Worldwide opened up about his first collaboration with Shelton.

“This to me is like when Run-DMC and Aerosmith did ‘Walk This Way’,” he explained, adding that he felt honored to work with the country vocalist.

This is not the first time that Pitbull ventures into country music. He added his Miami flare to Keith Urban’s “Sun Don’t Let Me Down” from 2016’s “Ripcord”, and to Kesha’s 2013 country-infused hit, “Timber”.

While he recently performed at the NFL’s Tailgate Tropicale Party at the Super Bowl, Pitbull unveiled his eleventh studio album, “Libertad 548”, back in September 2019.

Meanwhile, Shelton performed the romantic duet “Nothing But You” with Gwen Stefani for the first time at the 62nd Grammy Awards.

Watch @blakeshelton and @gwenstefani share their love on the #GRAMMYs stage for the first time ever. ❤️ https://t.co/lOe70CpIJL ❤ pic.twitter.com/SV6mZxV0yl

The country superstar recently resumed his coaching role on the 18th season of NBC’s “The Voice”, ahead of his “Friends and Heroes” 2020 Tour.

The trek will kick off on Feb. 13 in Portland, Oregon, with Shelton sharing the stage with John Anderson and Lauren Alaina among others. IB/NVG