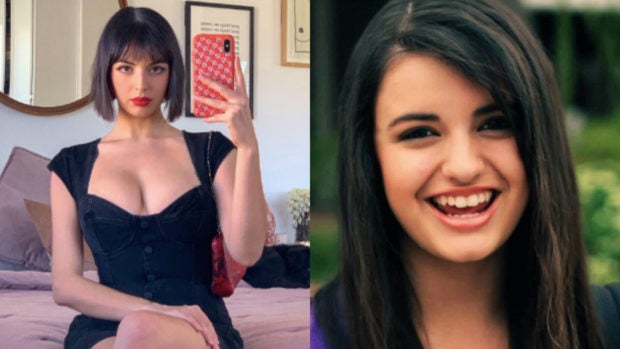 An older and wiser Rebecca Black (L) has a message for her younger self who was bullied online when she was 13 (R). Image: Twitter/@MsRebeccaBlack

Nine years since Rebecca Black debuted the music video for the 2000s viral song “Friday”, the singer addressed her younger self and revealed that she battled depression and bullying in her teens.

But despite her struggles, Black sent a message of hope as she said that time heals all wounds.

“Friday” became an internet sensation in 2011 for its catchy lyrics and its peculiar music video. It garnered mixed reactions from viewers, many of them negative, and was even dubbed “the worst song ever” as per ABC’s report on March 18, 2011. Much of the criticism was rooted in Black’s singing and the song’s lyrics, while others also attacked the singer on a personal level.

Black, 22, wrote a message for four versions of herself, imagining what she would say if she could talk to them today, as seen on her Twitter account yesterday, Feb. 11.

Black also addressed a version of herself today who still “felt disgusting when she looked in the mirror.”

The singer reminded herself that every day is “a new opportunity to shift your reality and lift your spirit.” Black also declared that she was not defined by one choice or thing that she did.

“[T]ime heals and nothing is finite,” the singer said. “[It’s] a process that’s never too late to begin.”

Black’s post has garnered a ton of love from her online supporters. She also retweeted a response to her post from a gamer Tempo ZeRo (@zerowondering). The gamer reminded social media users of how their words could affect others.

“This is a very scary reminder on how super impactful the internet can be,” the gamer said. “A lot of people made fun of her, and for them that was it. But for her, she went through a massive struggle for many years.”

This is a very scary reminder on how super impactful the internet can be. A lot of people made fun of her, and for them that was it. But for her, she went through a massive struggle for many years. You never really know how you can affect people with words. People forget this. https://t.co/t0iVAbAiSI

On a follow-up post, Black sent love to her followers as she thanked them for all their kind words.

okay so i just got back on twitter and i am just so blown away and confused and grateful at the messages you guys have been sending to me in response to this. i could have never imagined support like this. that you a million times i just wanna cry!! (happily!!!) https://t.co/SOxFLJhjD9

“[I] am just so blown away and confused and grateful at the messages you guys have been sending to me in response to this,” Black stated. “[I] could have never imagined support like this.”