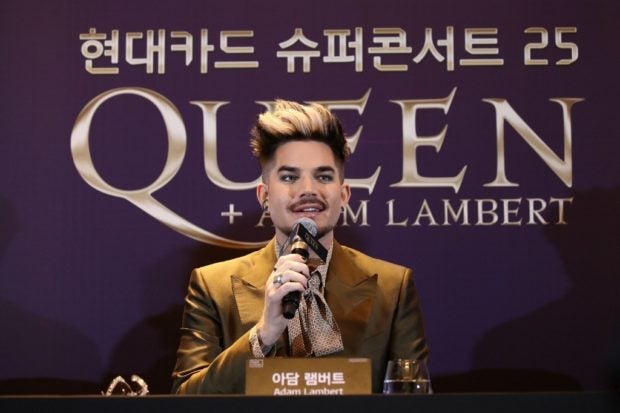 Queen band member Adam Lambert at a press conference ahead of the Rhapsody Tour at a hotel in Seoul on Jan. 16, 2020  (Image: AFP/Chung Sung-Jun via AFP Relaxnews)

Adam Lambert revealed that he was collaborating with legendary guitarist Nile Rodgers on “Roses” back in January.

The ’70s rock-inspired number finds Lambert asking for his lover’s attention, crooning “You left your hat on the window sill/ You’re coming back, yeah you always will” over Rodgers’ signature guitar licks.

This is not the first time that the Queen frontman teams up with Rodgers, as the pair previously collaborated for “Shady” off the deluxe edition of Lambert’s 2012 sophomore album, “Trespassing.”

“Roses” is one of the 13 “slinky numbers to catch a vibe to” that will appear on Lambert’s forthcoming fourth studio album, “Velvet.”

The follow-up to 2015’s “The Original High” will also feature the previously shared singles “Superpower,” “Comin’ in Hot” and “Feel Something”.

In addition to gearing up toward the release of his new album, Lambert will be performing with Queen and Alice Cooper for the benefit concert Fire Fight Australia, which will be held on Feb. 27 at Sydney’s ANZ Stadium.

In between Queen’s “Rhapsody Tour” across Europe, the singer-songwriter will fly back to the United States for a three-night residency at the Venetian Theater in Las Vegas.

Lambert will also support his fourth studio opus with an extensive European tour, kicking off on Aug. 30 for the Manchester Gay Pride festival and concluding on Sept. 12 in Helsinki, Finland.