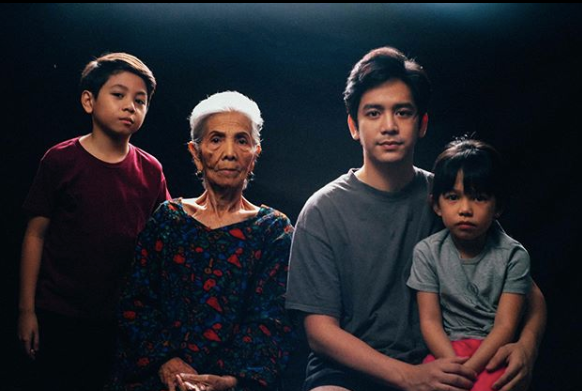 The cast of the film adaptation of the Bob Ong novel “Ang Mga Kaibigan ni Mama Susan” has now been revealed, and award-winning actor Joshua Garcia will be leading the ensemble alongside veteran actress Angie Ferro.

Garcia will be playing the role of Gilberto “Galo” Manansala, while Ferro, also an award-winning actress, will take on the titular role of Mama Susan, film companies Black Sheep and Regal Films revealed via social media.

The “Block Z” star will also be joined by other young actors, with Patrick Quiroz playing as Jovit, Kelvin Miranda as Louie, Henz Villaraiz as Roy, and Miko Gallardo as Joselito.

Regal Films gave fans a peek of the cast in a look test for the film adaptation via Twitter yesterday, Feb. 10.

ICYMI: Here are some photos from #MamaSusan Look Test!

Garcia alongside the other young actors can be seen donning school uniforms in the series of promotional photos. Garcia and Ferro pose for a family picture, the first peek of Galo and Mama Susan in one frame.

In “Ang Mga Kaibigan ni Mama Susan”, Galo is a university student who writes on his journal the string of unsettling and mysterious experiences he has while living with his grandmother, Mama Susan.

“Ang Mga Kaibigan ni Mama Susan” will be directed by renowned filmmaker Chito S. Roño, who is known for classic Filipino horror films “Feng Shui” and “Sukob”. This will be the third Bob Ong book to be adapted into a movie, with the first two being “ABNKKBSNPLAko?!” and “Lumayo Ka Nga Sa Akin”. JB