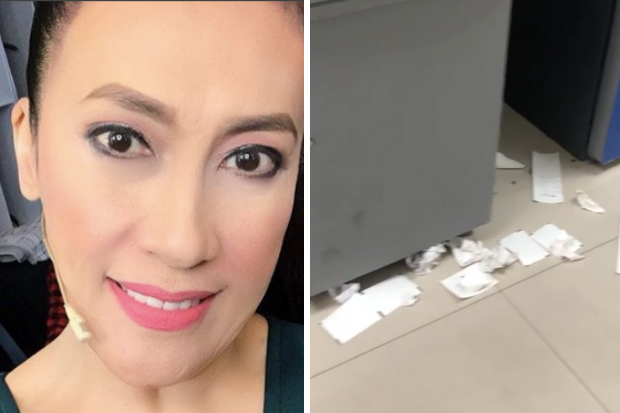 Comedy Queen Ai-Ai delas Alas was irked at how some Filipinos tend to improperly throw their receipts on the floor despite the automated teller machine (ATM) area having a trash can.

Delas Alas took a video of the area and called out Filipinos on their seeming lack of discipline on Instagram last Sunday, Feb. 2.

(This is too much. Sisters and brothers, we can throw it here right? There is a proper place where you can dispose of your paper. We can do it, right? I hope that we stop doing this [littering].)

“Matuto naman tayong maging disiplinado (Let us learn how to be disciplined),” she added.

Delas Alas’ short video shows the area surrounding the ATM littered with receipts from the machine itself while there is a trash bin in front of it.

(At least sometimes, let us be disciplined in our lives. It is so messy at the ATM even though there is a trash bin in front.)

The comedienne then went on about how under the late dictator Ferdinand Marcos’s reign, during the Martial law era, there was a slogan that went: “Sa ikauunlad ng bayan, disiplina ang kailangan (For the nation to progress, there must be discipline).”

(Maybe he could see back then this “sickness” of the Filipinos so he thought of that slogan, which we should be following until today.)

The said slogan was created by Marcos’s authoritarian regime after he declared martial law in 1972. NVG