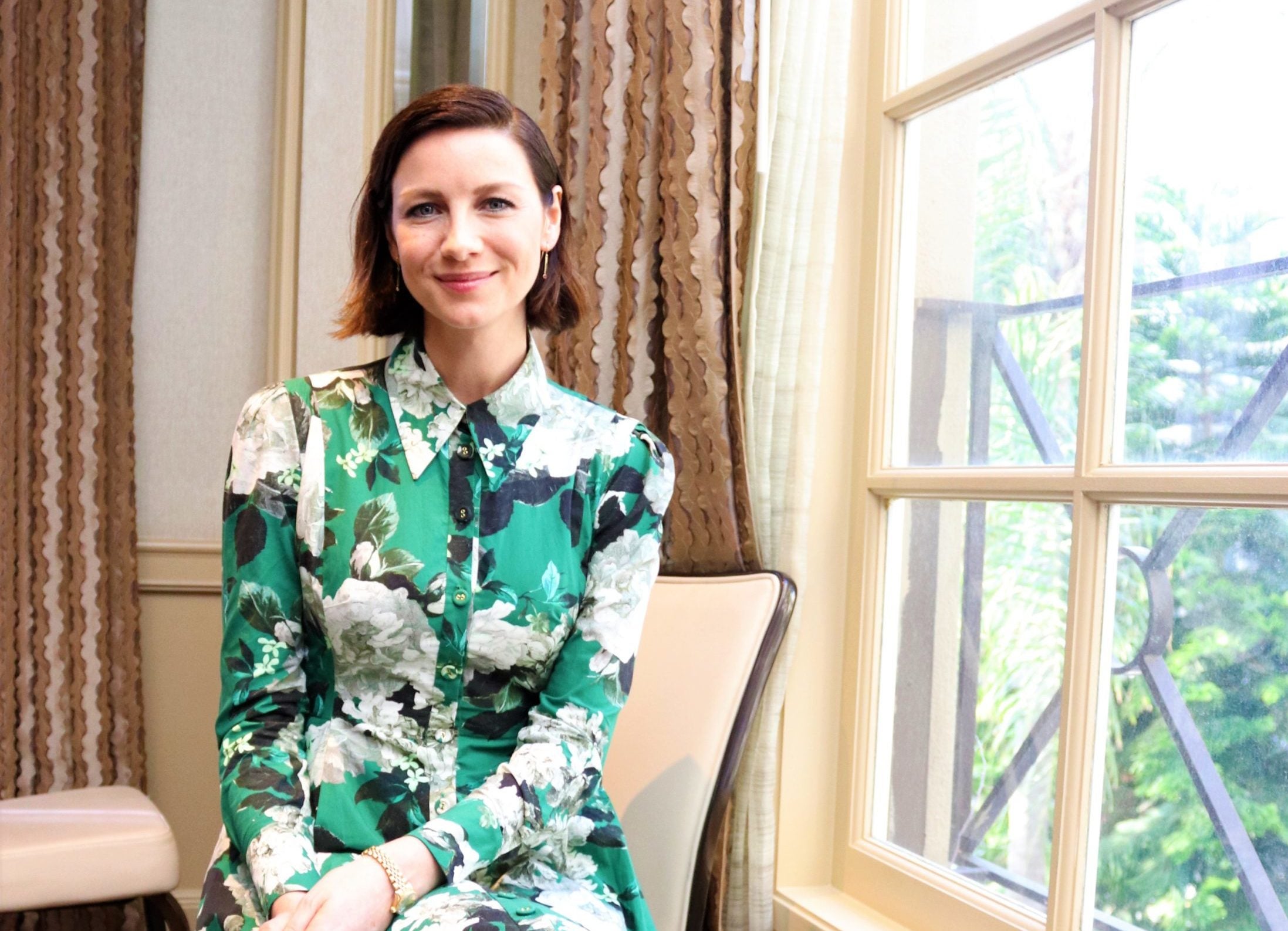 LOS ANGELES—“I’m very protective of Claire,” Caitriona Balfe said of her beloved “Outlander” character that she has been playing for six years now. “That’s the first thing that comes to mind.”

“It’s hard to know because I spend so much time playing her,” added Caitriona, who was asked how Claire Beauchamp Randall Fraser, her nurse-turned-doctor time traveler character, has influenced her in real life. The actress wore a long, green Erdem floral print dress and Christian Louboutin shoes in this LA interview.

“We shoot for nine to 10 months of the year,” the Dublin, Ireland native said of filming Starz’s drama series, which is based on Diana Gabaldon’s book series and is now going into Season Five this year. The show has a huge following.

Caitriona and Sam Heughan, who plays Jamie Fraser, also have many fans. The former model, who gave a fine performance opposite Christian Bale in “Ford v Ferrari,” explained, “More of my waking life these days is playing Claire quite often than not.”

The 40-year-old four-time Golden Globe nominee continued, “But Claire’s confidence and forthrightness have definitely inspired some of those attributes in me. I have a tendency to be shy, sometimes. Playing Claire has given me confidence. Her can-do attitude has definitely rubbed off on me, and that’s in the best way.”

Starz teased the coming episodes which will finally end the “droughtlander” (the term coined to refer to the long interval between the series’ seasons) this way: “Season Five of ‘Outlander’ finds the Frasers fighting for the home they have forged on Fraser’s Ridge. Jamie must find a way to defend all that he has created in America, and to protect those who look to him for leadership—while hiding his personal relationship with Murtagh Fitzgibbons, the man whom Governor William Tryon has ordered him to kill.

“With her family together at last, Claire must use her modern medical knowledge and foresight to prevent them from being ripped apart once again. However, while focusing on protecting others, she risks losing sight of what it means to protect herself.”

You and Sam Heughan have been working together for a long time. You’re good friends, but do you annoy each other sometimes? You’re stirring the pot (laughs). Very rarely do we ever even get annoyed with each other, which is quite astounding considering that we do work so closely together. His time keeping can sometimes irk me when I’m left standing waiting for him quite often. 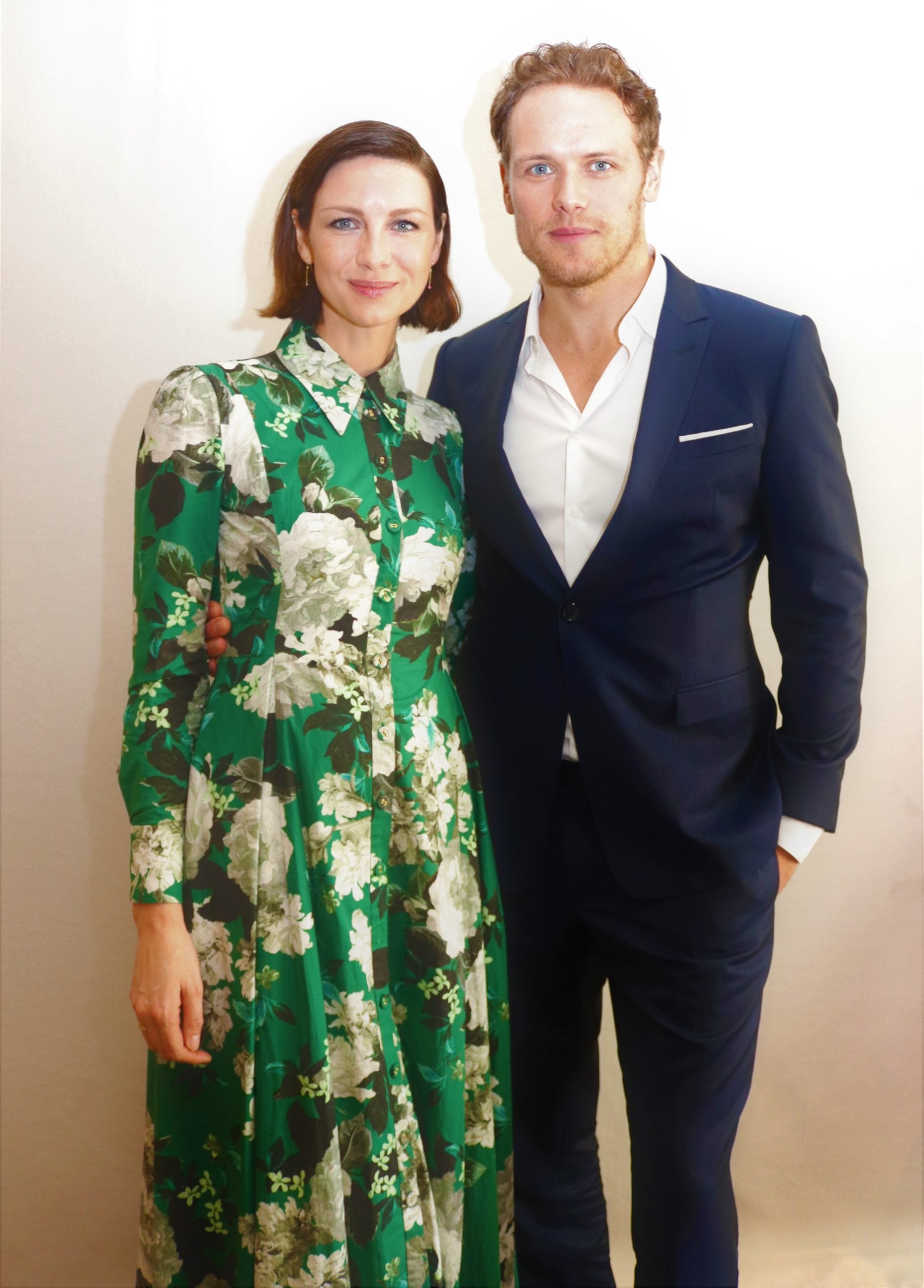 I probably boss him around a bit, so that probably irks him about me. We made a conscious decision when we started the show that we should have each other’s back throughout this. We knew we had to stick together as a team, and we’ve done that.

Can you share your thoughts on how long the show has lasted? I asked Sam the same question and he replied about how he’s turning 40 and the series is still going strong. Which he’s not happy about (turning 40) at all. I think it’s hilarious (laughs). This is our fifth season, but actually it was six-and-a-half years ago when we started filming. So, it’s a long chunk of time.

But the show has given us so much. It’s been the greatest experience thus far of my career, of my life. A lot of shows that we started with aren’t even on the air anymore.

There are many fans who are so devoted to the show, especially to the love story plot between you and Sam. Is that tough on your real-life partners? It hasn’t really been tough because Sam and I are such good friends. My husband (music producer Tony McGill) has known him since we started dating. I try not to read too much of the very intense “shipping” and all of that stuff, but sometimes, it gets a little mean. You obviously feel protective. You want to make sure that the people who aren’t part of your work aren’t harmed.

What’s it like playing a grandmother? Playing a grandmother at this age is fun because it’s make believe. I get to give them (kid actors) back and it’s great (laughs). We’ve had some really sweet little kids. But they don’t understand why you would have to do the same thing over and over again (laughs).

One of the draws of the series is its romanticism. Has the show made you more romantic? You’d probably have to ask my partner (laughs). It definitely has to rub off, you know. Even if you’re simulating those great big emotions, when you experience it, then you want more of that in reality. I feel very lucky that, through this show, I managed to meet the love of my life. So the show probably made me more of a romantic.

Looking back at your wedding last year, what can you share about it? The only thing I would say about my wedding is, I managed to squeeze it in on a weekend during production (laughs). What was most beautiful about it is that I had my very close family and friends there.

I just want to be happy in my life (laughs). I want to stay sane. I’m lucky that I have a job that I love. It’s very important that your career can’t be your only thing. So, I feel lucky that I’ve also found someone who makes me very happy. As long as I can keep those two things going well, then I’ll be good.

Now that you are a producer of the series as well, can you talk about working in front and behind the camera? We got our producer credit very late after the story had already been broken, and the first couple of scripts had already been written.

But what was important to me this season was to see where I can be of benefit to the production. Toward the end, especially the last few episodes where Claire has a very strong story line, it was great that I got to be integral into how those episodes were going to be told.

You have to have two different hats because obviously, looking at things as an actor is very myopic in one way. And as a producer, you must have an overview and understand that the reasons for doing certain things might have a cost, time or location reason. I’ve expanded my horizons.

Is it intentional on your part to not take on many other projects—films, for example? For me, as an actor, it’s important to refill the tank. You can’t always be on output mode. You run the risk of not understanding what real life is like and then being able to tell those stories. The hope is that you play many different characters.

What are your memories of the time when the show was just about to launch? Oh, wow. There’s one photo I remember particularly. It’s of myself, Tobias, Sam, Graham (McTavish) and Lotte (Verbeek). We were all like, what’s going on? This is crazy (laughs). It was so exciting because we didn’t know what the reception was going to be.

The show was just about to air. We’d been so sequestered away in Scotland making this show. We had only seen an episode at that point. Before that, I had been in LA for about four years and I had done maybe three or four jobs. In two of them, I didn’t speak (laughs). I’d always dreamed that I would be able to support myself as an actor. It’s mad to look back on that now.

How many more seasons will you do? We’re contracted for another couple of seasons. For Sam and me, what’s important is that the quality stays high, that we’re still challenged.

We took some risks even with the visual and tone of the episodes. I’m excited to see them. I haven’t yet, and I hope all those risks pay off. But it’s really nice to feel, five seasons in, that we’re still being asked to do something new, scary and challenging. That’s great. If I can still have that next season and the season after then, I’m happy.