Yam Laranas’ “Nightshift” is as much a supernatural thriller as it is a soporific viewing experience. Even its lead character, newly hired morgue assistant Jessie Pardo (Yam Concepcion), is always seen sleeping on the job—and, really, we don’t blame her.

Even without the chiller’s derivative twist, the fact that a Medical Technology graduate still reeling from the recent death of a loved one settles for a job dissecting cadavers and extracting human organs instead of growing microscopic organisms in a Petri dish still demands a plausible explanation.

The beautifully photographed film takes a lot of unnecessary detours just to drive home a less-than-consequential point or shock viewers out of somnolence. For trolls who are too lazy to use Google search to find out what the aforesaid words mean, go hide under a rock.

In our case, we resisted the urge to walk out of the screening and watch something else because we wanted to know if the film has what it takes to help viewers recover from boredom-induced apathy.

As noted earlier, we weren’t all alone because, for much of the film’s running time, Jessie is likewise often seen catching some Zs when she isn’t busy showing a perpetual look of sinister dread on her face when she isn’t subjected to the annoying presence—and failed attempt at comedy—of the people she’s forced to work with. 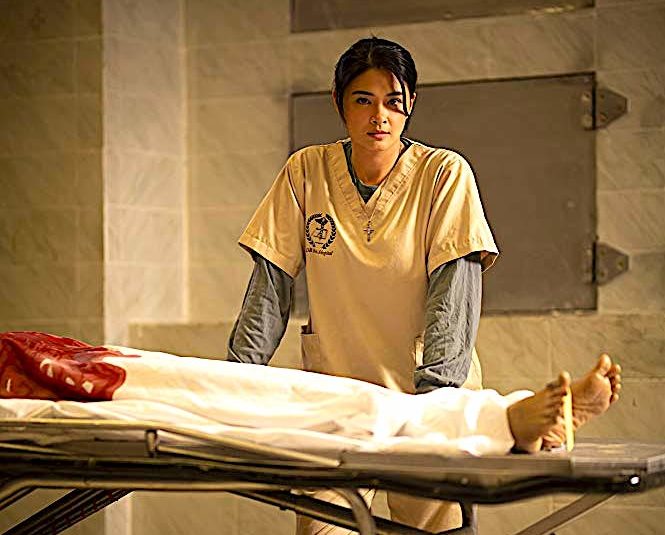 Jessie tries her best not to get spooked or distracted by the unexplained rustling and creaking noises she hears while she’s “stuck” in the claustrophobic morgue. Besides, she can’t go home because of typhoon-generated flooding outside the hospital, anyway.

But things take a turn for the twisted when Jessie begins seeing people standing creepily under the torrential rain or, worse, lifeless bodies suddenly rising from the dead. Before long, they move with coordinated gestures and speak in unison—it’s like “sabayang pagbigwas” in the afterlife. A similar setting or atmosphere is better utilized in the Shay Mitchell starrer, “The Possession of Hannah Grace,” in which a fresh-out-of-rehab former cop takes on the graveyard shift at a hospital morgue.

To be sure, Laranas has had some success in the horror-thriller genre (2004’s “Sigaw” and 2011’s “The Road” immediately come to mind). Even “The Echo,” his much-talked-about foray into Hollywood, wasn’t so bad (although it was actually a remake of “Sigaw”). But he’s had more misses than hits recently (“Aurora,” “Abomination,” “Patient X”).

Unfortunately, his latest film has too many gimmicks and not enough convincing and satisfying scares. Has Laranas run out of ideas?