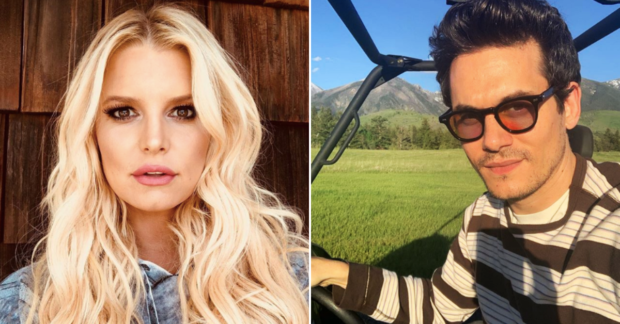 Jessica Simpson and John Mayer had an on-off relationship that Simpson said made her feel insecure.  Image: INQUIRER.net Stock Photo

Jessica Simpson spoke up on alcohol addiction in her upcoming memoir “Open Book,” pinpointing her relationship with singer John Mayer as a time when she began taking alcohol for anxiety.

The “Irresistible” singer said that while Mayer said he was “obsessed” with her, she felt insecure around him and doubted her smarts, as per excerpts of the book from People on Wednesday, Jan. 22.

In the early 2000s, Simpson had a reputation as a “dumb blonde”—a joke she went along with. But being with Mayer heightened her anxiety to the point that she would try to numb it with alcohol, she wrote in her memoir.

The two first met at a Grammy party in early 2005; Mayer showed his admiration by saying he liked her song “With You” and would write to her. She had just split from husband Nick Lachey at the time.

In 2006, they dated on and off in secret for months. “Again and again, he told me he was obsessed with me, sexually and emotionally,” said Simpson. However, fighting for him after breakups made her insecure.

“I constantly worried that I wasn’t smart enough for him,” she said. “He was so clever and treated conversation like a friendly competition that he had to win.”

Simpson would go as far as asking a friend to proofread texts just to make sure her grammar and spelling were correct.

“My anxiety would spike and I would pour another drink. It was the start of me relying on alcohol to mask my nerves,” she admitted.

“He loved me in the way that he could and I loved that love for a very long time,” she said. “Too long. And I went back and forth with it for a long time. But it did control me.”

The two singers are no longer on speaking terms after Mayer described her as a “sexual napalm” in a Playboy interview in 2010. Simpson said, “I was floored and embarrassed that my grandmother was actually gonna read that.”

“He was the most loyal person on the planet and when I read that he wasn’t, that was it for me,” she said. “I erased his number. He made it easy for me to walk away.”

Simpson has been sober since November 2017 with the support of her parents, friends and regular therapy sessions. The singer has been married to former NFL player Eric Johnson since 2014; they have three kids together.