Janella Salvador has ditched her long, luscious locks in favor of a new and just-as-stylish bob.

The actress revealed her fresh look on her Instagram page yesterday, Jan. 19. Aside from going for a shorter hairstyle, Salvador decided to get side-swept bangs.

Her fellow celebrities including Liza Soberano, Pia Wurtzbach and Jane Oineza were quick to express their admiration for Salvador’s new look. 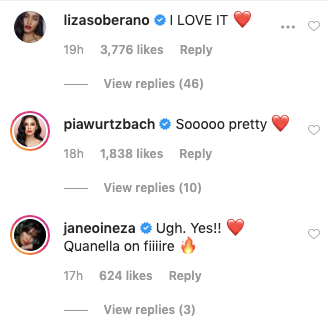 Meanwhile, some of her fans said she resembled other famous personalities both from the Philippines and abroad who sported a similar bob. A netizen (@abieutifullife) said she looked like vlogger Mimiyuuuh, while one @yannie_sy stated she could pass for Tokyo from the TV crime-drama series “Money Heist.”

Her fresh hairdo comes on the heels of the finale of her latest TV show, “The Killer Bride,” where she usually wore her long locks down to portray her character Emma. In the series, she starred alongside Maja Salvador, Joshua Garcia and Geoff Eigenmann.  /ra