Greta Thunberg turns 17, gets greeting from The 1975’s Matthew Healy: ‘You’re so metal’ 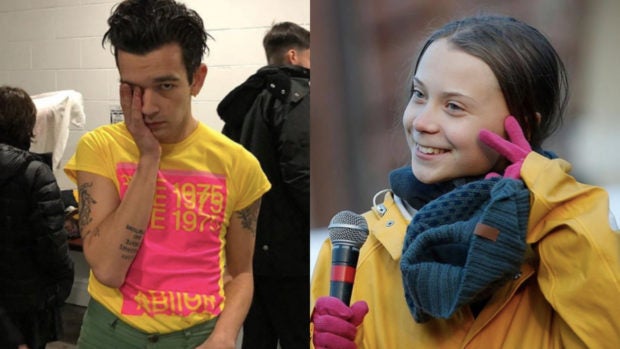 Climate activist Greta Thunberg had her 17th birthday on Jan. 3, and one of the people who expressed their admiration for her to mark her special day was pop rock band The 1975’s lead vocalist Matthew Healy. The two have been good friends who support each other’s endeavors, as Thunberg collaborated with Healy’s band last year.

After the British singer said the usual birthday greeting, Healy told Thunberg, “You are so metal.” The 1975 vocalist accompanied his birthday greeting with a photo of Thunberg, who appears to be reading a script, uploaded by Healy on his Instagram account last Saturday, Jan. 4.

The 1975 collaborated with the young activist on their 2019 self-titled single “The 1975”, which will be included in their upcoming fourth album “Notes on a Conditional Form”. The self-titled single addresses the current situation of the earth.

“We are right now in the beginning of a climate and ecological crisis, and we need to call it what it is: an emergency,” Thunberg said in the track. “We must acknowledge that we do not have the situation under control; and that we don’t have all the solutions yet; unless those solutions mean that we simply stop doing certain things.”

The collaboration is also a call into action against climate change.

“To do your best is no longer good enough. We must all do the seemingly impossible,” Thunberg stated. “It is time to rebel.”

After her birthday, Thunberg was back to informing the public about climate-related situations around the globe. Thunberg expressed her concern for the people affected by the Australian bushfire, on her Instagram account last Sunday, Jan. 5. She also criticized the lack of political action with regards to climate change.

“Australia is on fire,” Thunberg said. “And yet [all] of this still has not resulted in any political action. Because we still fail to make the connection between the climate crisis and increased extreme weather events and [natural] disasters like the #AustraliaFires.” JB