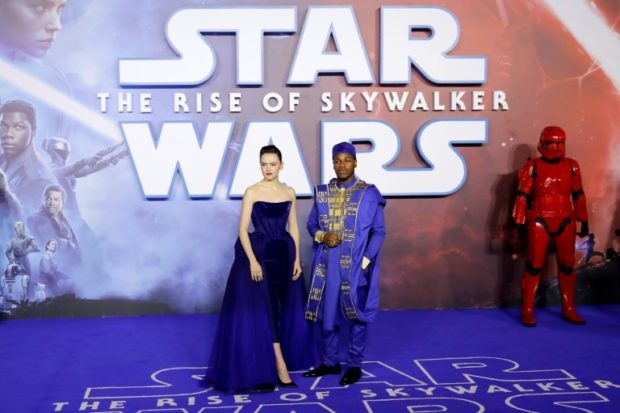 Actors Daisy Ridley and John Boyega posing upon arrival for the European premiere in London of “Star Wars: The Rise of Skywalker”. Image: AFP/Tolga Akmen via AFP Relaxnews

The Disney film, marketed as a grand finale of the nine-film Skywalker Saga, has had mixed reviews and was down considerably from last weekend’s lofty $177.4 million opening. But it has compiled a strong domestic total of $364.5 million.

It again maintained a big lead over the no. 2 film, Sony’s “Jumanji: The Next Level”, an action sequel starring Dwayne “The Rock” Johnson and Kevin Hart, which had $34.4 million in North American ticket sales for the Friday-through-Sunday period.

In third for the second straight week was Disney’s “Frozen II”, at $17 million. The animated musical film has Broadway star Idina Menzel voicing Queen Elsa in her latest adventures.

Louisa May Alcott’s classic novel “Little Women” has been brought to the screen many times — no fewer than seven, by Variety‘s count — but the new version from director Greta Gerwig has drawn strong reviews and netted $16.2 million to place fourth in its debut this weekend.

The film stars Saoirse Ronan, Florence Pugh, Timothee Chalamet, Emma Watson and Laura Dern, in the story of the joys and struggles of four sisters during the United States Civil War.

In fifth was new Fox/Disney release “Spies in Disguise”, at $13.4 million. The animated children’s film features the voices of Will Smith and Tom Holland.

Force is still with ‘Star Wars,’ with massive N.America opening