WATCH: Mariah Carey’s ‘All I Want for Christmas Is You’ lip-synced by celebs, friends 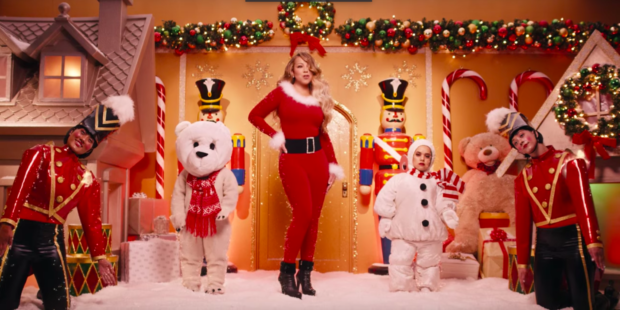 Ever since its release in 1994, Mariah Carey’s classic holiday hit “All I Want For Christmas Is You” has been an anthem in every household come the Yuletide season, and it seems that it is far from getting old.

To commemorate the song’s 25th anniversary, a lip sync tribute was created by Carey’s friends and “favorite artists from around the world,” from the likes of Katy Perry, Ariana Grande and Chance the Rapper, to Ryan Reynolds and Snoop Dogg.

The tribute, aptly titled “Happy Anniversary, All I Want For Christmas Is You!” was posted on Carey’s YouTube channel yesterday, Dec. 23. The song is on its second consecutive week of topping Billboard‘s Hot 100 chart.

“This song is for Mara- Maraj… Maraja Carrey. This song is for you,” comedian Tyler Perry jokingly stutters the singer’s name as he starts off the song while sitting in front of a piano.

Ryan Reynolds and James Corden then appears, followed by Katy Perry singing the first notes of the song while holding a puppy.

“WOW! This is one of the best Christmas gifts I could ever have gotten,” the singer said on her Instagram account earlier today, Dec. 24. “I am so thankful to all of my friends and favorite artists who participated in this video. You brought a huge smile to my face. THANK YOU! (heart emoji).”

Aside from her friends and fellow celebrities, Carey’s twins Roc and Roe made special appearances and capped off the tribute, dancing to the song as it fades out.

Here is a list of everyone who appeared in the celebration video:

Last week, “All I Want For Christmas Is You” topped the Billboard‘s Hot 100 for the first time since its release in 1994. JB

After 25 years, Mariah Carey’s ‘All I Want for Christmas Is You’ tops US charts

TAGS: All I Want for Christmas is You, Christmas songs, lip-sync, Mariah Carey, tribute