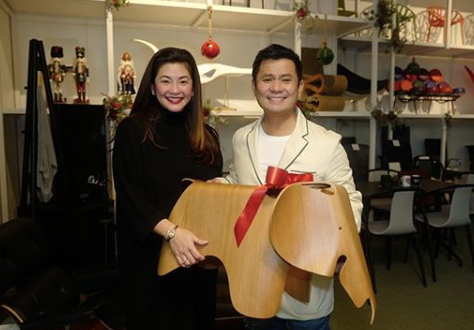 Velasquez and Alcasid celebrated their ninth wedding anniversary yesterday, Dec. 22. Alcasid took his wife to a furniture store which appeared to be transformed into an event’s venue for the occasion, as seen on Alcasid’s Instagram account today, Dec. 23.

The surprise party was a star-studded event with a performance from Popstar Princess Sarah Geronimo and her fiancé Matteo Guidicelli.

“Kinilig kami para sa kanila (We got giddy with happiness by just watching them),” Alcasid said.

Padilla thanked Alcasid and Velasquez for inviting them, posting a photo of their group on her Instagram account yesterday.

“Not a Christmas party but a Wedding Anniversary celebration,” Padilla said.

Alcasid also expressed his adoration for his wife in his heartfelt anniversary message. He thanked Velasquez for sharing her life with him.

“9 years ago, i was blessed to start this beautiful journey with you my love,” Alcasid stated. “Salamat mahal (Thank you love) for letting me in your life and allowing me to share mine with you. I am so in love with you Regina.”

Velasquez also greeted Alcasid on their anniversary, saying that Alcasid’s love is never-changing.

(You are still the same, you still make me happy and [you still] love me. But I have changed, because now, I love you more than I ever did before. Love, happy wedding anniversary.) JB

‘I am more in love than ever’: Iza Calzado marks 1st wedding anniversary