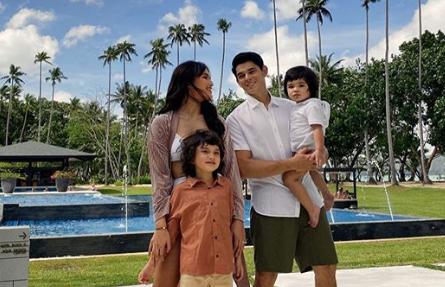 Sarah Lahbati and Richard Gutierrez once again have jetted off to El Nido, Palawan to spend some quality beach time with their sons, Zion and Kai.

The family of four landed on the island last Thursday, Dec. 12, as seen on Lahbati’s Instagram post on the same day.

“Made it to El Nido [heart emoji],” she said, accompanying a series of photos of the family’s airplane trip.

Lahbati expressed her enthusiasm in another post while giving fans a peek at the family of four who just arrived at the hotel they are staying at.

“So happy to be here with the fam & to be able to spend some much needed quality time,” she said.

Lahbati did not fail to show off her stunning figure, as the actress donned a green one-piece swimsuit while onboard a yacht, as seen on her Instagram last Friday, Dec. 13.

Lahbati also donned a simple all-white ensemble of shorts, a tank top and a long-sleeved blouse, as seen on her Instagram post yesterday, Dec. 14.

The couple undoubtedly has nothing but love for each other, as the two can be seen enjoying each other’s company in their beach getaway.

“El Nido with my fave person,” Lahbati said on a snap of her and Gutierrez hugging each other intimately on the beach, as seen on her Instagram post on Dec. 13.

Gutierrez likewise showed off his love for Lahbati, telling fans, “Discover a place where you’ll find that happiness is already where you’re at.”

Of course, the couple also gave fans snippets of the whole family spending quality time with each other on the island.

“Time in paradise with the tribe,” Gutierrez posted on Instagram on Friday.

Gutierrez said they were “off to explore new islands” in his Instagram post yesterday, where he can be seen chilling with his eldest son Zion while on a yacht.

Lahbati, Gutierrez and firstborn Zion have already gone to El Nido, Palawan earlier this year. This time, however, the youngest son, Kai, has joined the family on the beach getaway. JB