Liza ‘better’ in kissing scenes than bf Quen, who kisses ‘like a 2nd grader’ 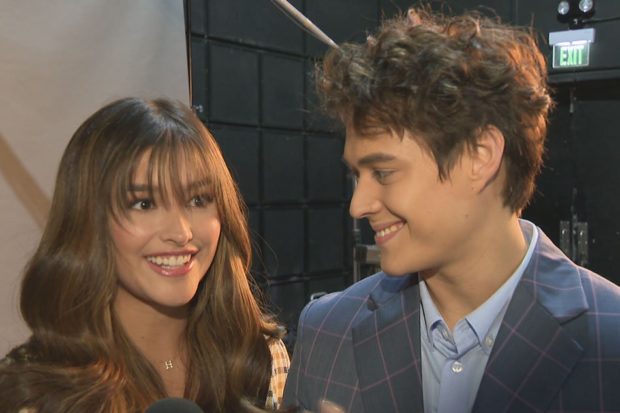 “I’m better at doing kissing scenes … He kisses like a second grader.”

This was how Liza Soberano described real and reel-life partner Enrique Gil to reporters during a media gathering for their latest project, the romantic-comedy series “Make It With You.”

The couple was asked whether or not they have kissing scenes in the series, to which headwriter Mark Angos replied: “They will be super intimate. They’re currently working on Week 2 so they don’t know this yet. They have yet to find out what will happen to Week 10, for example.”

Liza quipped that whenever Enrique would have a kissing scene, like the one with Bea Alonzo in the movie “She’s the One,” the actor would down half a bottle of mouthwash. But when it was time to do their kissing scene for their most recent project, “Alone/Together (2018),” not only did Enrique fail to gargle with mouthwash, he also ate a lot of street food before the take.

“He is too comfortable with me already,” Liza observed. “But your breath also smelled like the tuna you ate. Mas mabaho nga ’yon,” Enrique interjected.

“All I can say is that when it comes to doing kissing scenes, I do it better than Quen (Enrique’s nickname), not in the context that I’m a good kisser. It’s just that I’m more at ease because to me, it’s just work.”

Enrique agreed: “It’s true! I’m the better kisser, but she’s more relaxed. I get nervous. I feel uncomfortable. She handles it better.”

How would Liza describe a “Quen kiss?” She replied: “Parang Grade 2 lang! In the kissing scene we shot at a park in New York for ‘Alone/Together,’ Quen would whisper, ‘I will kiss you now, I will kiss you now…’ He was scared because Tito Ogie (Diaz, her manager) was watching, even though I kept telling him to relax. Tito Ogie already knew we were shooting a kissing scene, so Ken shouldn’t feel shy anymore. We were supposed to be crying while kissing, but he couldn’t do it. We had to do it for several takes because he couldn’t kiss me correctly.”

“It’s just that the timing of a kiss has to be right,” Enrique explained.

In Croatia, where a portion of “Make It With You” was shot, Liza quipped that Enrique broke the bed they used as a prop in one scene because “sobra siyang kinilig.” The couple refused to elaborate.

According to Liza and Enrique, collectively called “LizQuen,” viewers should expect them to play characters that are older and more mature in “Make It With You.”

“It’s another amazing love story. I hope they will follow the journey of our characters Billy and Gabo, as young Filipinos searching for themselves abroad. The audience will learn a lot,” Liza said.

Enrique said this particular teleserye has been in the works for years now.

Both said they enjoyed shooting in far locations like in the teleserye “Forevermore” (2015), which was shot in Benguet. “For some reason, I feel like it’s easier for the character because you’re always there with the same set of people. You’re constantly reminded of your character,” Liza said.

“You’re stripped off the things you usually have and the people you normally see are far from you,” added Enrique. “The environment is different, so it helps you forget who you are for a while.”

On working with other actors, Enrique said, “We know that we need that to grow as actors.” Liza added: “We’re open to it, but we’re not in a rush…”

Liza said she enjoyed watching Enrique in projects that didn’t include her, “because I see a different Quen. He was good in ‘Seven Sundays’ (2017). It’s like a breather for him.”

“Make It With You,” codirected by Cathy Garcia-Molina and Richard Arellano for Star Creatives, will air on ABS-CBN in 2020.