Filmmaker Quark Henares had the opportunity of meeting U2’s The Edge at a restaurant in Poblacion, Makati, yesterday, Dec. 10, the eve the band’s concert in the Philippines.

Upon meeting the lead guitarist, whose real name is David Howell Evans, Henares thanked him for “one of the best shows in my life” when he saw the Irish rock band at Madison Square Garden in the United States.

“I thanked him for being brave enough to say what they said about [our] government,” he said in his Instagram post yesterday.”He thanked us for the food and drink, especially the crab.”

Midway into their conversation, Henares said “someone was lovely enough” to tell The Edge that he was a great director. When the guitarist heard it, he immediately asked Henares for his business card.

Producer Jako de Leon even captured the exact moment The Edge asked for Henares’ business card, as seen in the filmmaker’s Instagram Stories. 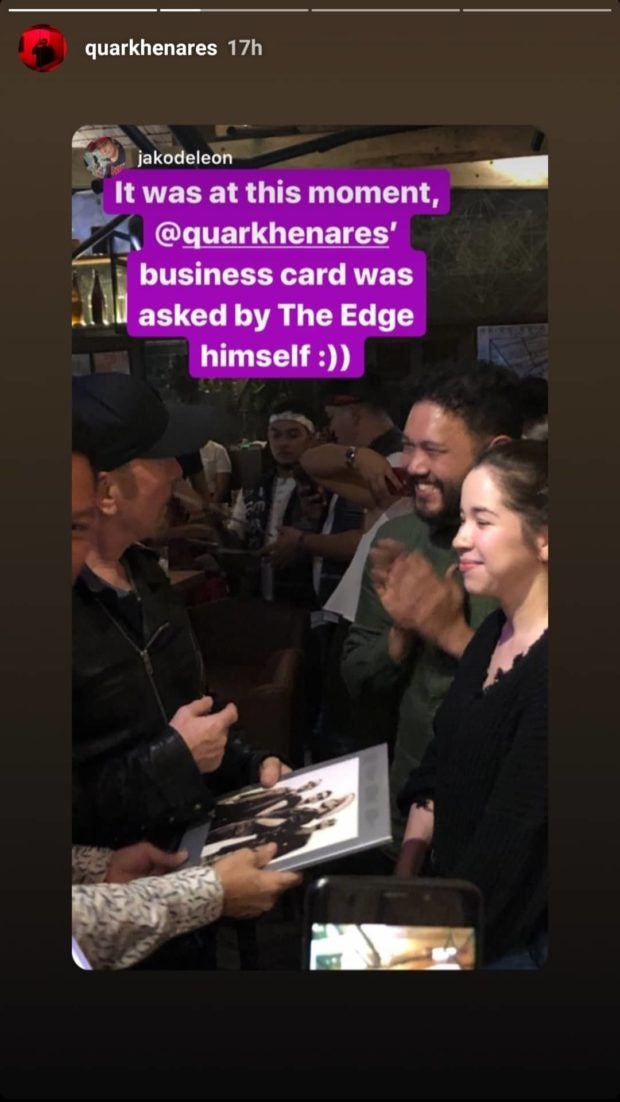 The filmmaker appeared to be starstruck from the encounter, saying that it only sank in when he created his post.

“THE F*CKING EDGE HAS MY BUSINESS CARD!” Henares stated.

Agimat Foraging Bar & Kitchen, where the exchange between the filmmaker and the guitarist took place, later revealed in an Instagram post that The Edge’s visit was planned a week in advance.

“It was an honour for us to showcase Filipino produce and cuisine to The Edge, his lovely wife, Chef Mario Batali and the rest of their group,” Agimat stated. “Highlight of the night was when they told us that they were ‘blown away by the food.'”