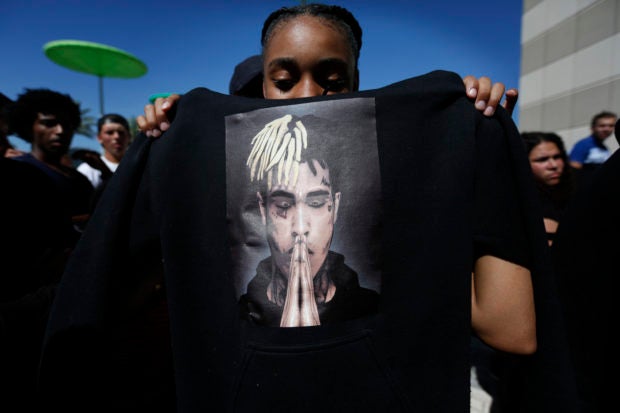 A fan holds up a sweatshirt with an image of slain rapper XXXTentacion, before his memorial on June 27, 2018, in Sunrise, Florida. Image: AP/Brynn Anderson

Some fans camped out for hours to ensure entrance to the party. At midnight, the album played as emotional videos of the slain rapper played on a screen behind the stage. XXXTentacion’s mother stood onstage, hugging family and friends and occasionally dancing to the music. She said she was trying to stay positive.

Earlier in the night, Diplo took to the DJ booth as fans lined up for free tattoos and perused an outdoor museum filled with XXXTentacion memorabilia, including three wax statues, family photos and hand-written notes.

The car that XXXTentacion was last seen alive in was also on display. The 20-year-old was gunned down while leaving a motorcycle shop in 2018. His sudden death shocked fans, many of whom unleashed praise for him. Others were more critical of the troubled rapper and pointed to his multiple arrests, including charges that he severely beat and abused his girlfriend.

Four suspects were arrested in connection with his death. RGA