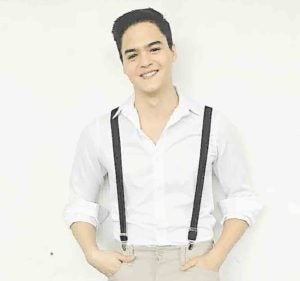 “I’m sure about her,” said actor Mark Neumann when asked why he would often call long-time girlfriend, Maffy Villamor, his “fiancée,” even though he has yet to propose to her.

The couple has been dating for four years now. The 25-year-old actor confirmed that they are now living together at his family home in Lemery, Batangas.

“I’m working on that proposal. I’m just getting all the papers ready,” Mark said during the 25th anniversary party of Bioessence that also coincided with the skin services brand’s relaunch of its “Caring Beyond Beauty” campaign.

As it turned out, securing all the documents needed for their wedding is not that easy for the German-born actor.

“I contacted the embassy here. It took months before they replied,” explained Mark. “They had to reopen my case because I haven’t been to Germany for more than 10 years. They had to track my records there to make sure that I didn’t get married anywhere in Germany. That took time, too.”

Mark said it didn’t help that the agency in Germany he was communicating with had only wanted hard copies of his documents from Manila.

“I sent everything to them. Once they’re done checking the papers, they will send them back with the necessary adjustments. I hope I don’t need to resend anything to them anymore after that,” he shared with reporters.

Mark, who holds a dual citizenship, has a Filipino father and a Croatian mother. His dad was adopted and later assumed a German surname.

“I have to deal with both sides, the German and Philippine governments,” he pointed out.

“I don’t want to call her just my girlfriend. To me, she’s more than that,” Mark said of Maffy, who is from Cebu. “She is special. We have a lot in common, especially our hobbies. She also understands my work as an actor.”

In fact, Mark said Maffy has already seen “Batang Poz,” his latest project that began streaming on iWant in July.

“She cringed a little, but she said she was proud of me. She even praised my performance. She’s not the jealous type,” Mark added.

In “Batang Poz,” Mark plays Gab, who discovers he got HIV/AIDS after having sexual intercourse with a gay man.

Mark said having a life partner who is not from show business has its advantages.

“You will have more time for each other. If she’s also an actress, I bet she’d be away most of the time because of out-of-town rackets,” he said. “She joins me at work sometimes, if she’s not too busy. In fact, she has met all the cast of ‘Batang Poz.’”

Mark has just finished doing an action film by Ato Bautista, with “Vendetta” as working title, and with Lito Lapid in the lead.

He has also just received his license as a financial adviser for an insurance company.

“I agreed to get an insurance policy three years ago. I got curious, took an exam and passed,” he shared with reporters. “What I want is to erase the stigma attached to insurance agents. People perceive them as a bunch of con men na benta lang nang benta. We want to be able to help improve lives of Filipinos by teaching them how to allocate [funds] and manage cash flow.”

Mark, however, said he would not leave show biz to pursue a corporate career. “It’s not like I have an office and work from 8 a.m. to 5 p.m. This is just on the side. I can still pursue my passion for acting. In fact, I recently attended a workshop for acting in action films. I’m excited to be able to put to good use what I learned there,” he said.

Read Next
Anthony Hopkins: From Hannibal Lecter to Pope Benedict
EDITORS' PICK
EuroMillions Superdraw: A lottery draw unlike any other is coming to the Philippines
‘Justice will be done,’ Duterte assures as he vowed probe on Jolo incident to bare ‘truth’
Water remains our saving grace right now
Smart releases Hyun Bin’s second TVC
Current dominant strain of COVID-19 more infectious than original—study
DOLE: Return of OFWs’ remains from Saudi to be ‘delayed,’ deadline moved to ‘early next week’
MOST READ
Locsin warns of ‘severest response’ if China’s army drills in SCS ‘spill over’ to PH domain
Duterte tells military: No other president looked at you the way I did
BREAKING: Duterte signs anti-terror bill into law
Go apologizes for 5-on-5 game; PBA summons Japeth, ROS rookie
Don't miss out on the latest news and information.