Pops: Martin and I can now laugh at our mistakes in the past | Inquirer Entertainment
Close
menu
search

Pops: Martin and I can now laugh at our mistakes in the past 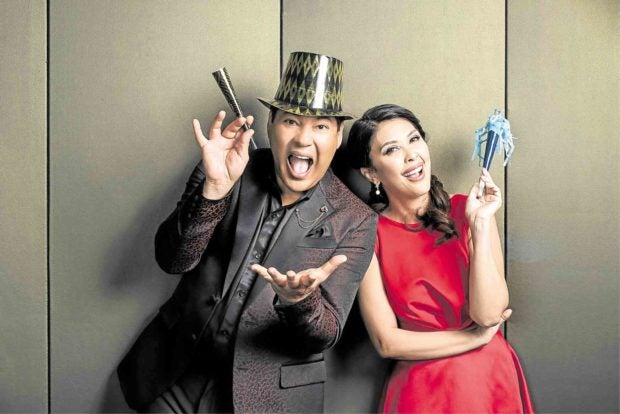 Pops Fernandez was admittedly nervous prior to the opening leg of her recent US tour with Martin Nievera. It had been quite a while since the ex-couple last performed together, and Pops was anxious about how things would unfold onstage.

“What would we do? What should we say?” she thought. “I was anxious, anticipating what was going to happen.”

But when the lights went on, it was like they have never been away. “It’s like riding a bike! Did that come out right?” Pops quipped, laughing in an interview for “The Royal Affair,” her New Year’s Eve show with Martin on Dec. 31 at The Tent at Solaire Resorts and Casino (call 88919999).

After many years of performing together, navigating a concert has become second nature to Pops and Martin. “We don’t really plan or talk about what we’re going to do. If you believe in chemistry, then that’s what we have,” she said. “Somehow, it all just comes out naturally.”

This despite everything they have been through. “We managed to remain friends because we can now look at our past from a lighter standpoint. We can laugh at our mistakes,” she said.

Revelers can expect a night of free-flowing beverages, fine dining and music at “The Royal Affair,” with the quartet Fourtissimo and the showband Red Picasso ushering in Pops and Martin. There will also be a poolside after-party, with performances from 3rd Avenue, Arman Ferrer, Floyd Tena, Gian Magdangal, Shiela Valderrama-Martinez, Carla Laforteza and Yanah Laurel.

“I love doing New Year’s Eve shows because the people are always happy and in a party mode,” Pops said. “We will be doing a lot of our hits, of course, but we will transition to more upbeat tunes toward the end.”

While she has been performing for more than 30 years now, Pops said she still gets butterflies in her stomach before her song numbers—and that’s actually a good thing.

“I still get nervous—more excited, actually—and you just want to reach the halfway mark of the show, where you’re already at ease or confident onstage. I think the nerves are important. If you’re so sure and confident about what you do, things won’t be as exciting anymore,” she said.

Plus, you have to consider the fact that every gig is different. “You can be singing the same songs, but it’s never the same. The viewers are different, they react differently. And you will have to find ways to connect with them and touch their emotions,” Pops said, adding that she has been exercising her voice more these past couple of months.

“The last big show I did was ‘Foursome’ (in 2013), so I have been practicing at home a lot,” said the seasoned artist, dubbed the Concert Queen. “That’s very important.”

Next year, Pops plans to perform more, but producing events and movies through her company DSL will still be the priority. “If there’s a good offer, why not? Let’s see,” Pops said. “But if ever, I just want something light and not so taxing, so I can still do production work.”

She’s wary of taking in too many projects at the same time. “I don’t want to spread myself too thin. I believe in focus and doing things one at a time,” Pops stressed.