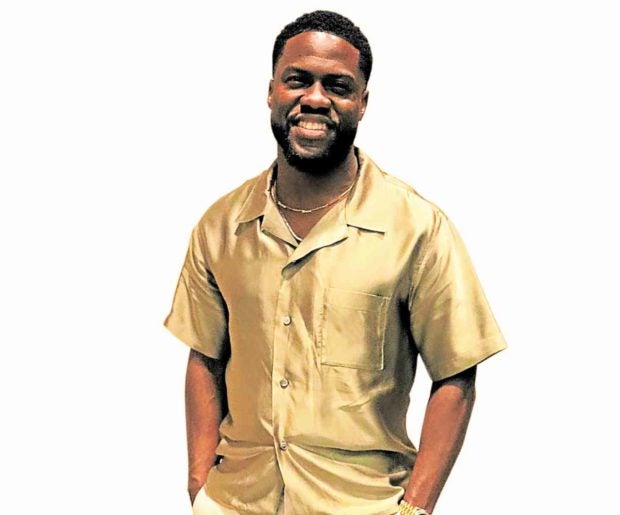 LOS ANGELES—“Maybe this was a wake-up call to make me understand that I need to say thank you more,” Kevin Hart said in our recent interview, almost two months after a car accident in which he suffered a serious back injury.

It was one of Kevin’s first interviews since the car crash last Sept. 1 in which he was a passenger in his Plymouth Barracuda, which careened off Mulholland Highway and fell on an embankment.

Jared Black, who drove Kevin’s car, also suffered back injuries, while the third passenger, Black’s fiancée Rebecca Broxterman, only had minor injuries. After undergoing surgery and staying in a hospital for more than a week, Kevin checked in at an inpatient physical therapy facility.

Appearing for this chat in Cabo San Lucas, Mexico to talk about his new movie, director Jake Kasdan’s “Jumanji: The Next Level,” Kevin seemed his usual brashly funny self. But he said he was not fully recovered.

Are you fully recovered from the accident? No, definitely not fully recovered. I’m probably about 72 percent recovered. I say the 72 just because I don’t like the number 70 (laughs). But I’m going to be able to recover to 100 percent, and get back to myself.

I don’t think that you truly understand how valuable this thing called life is, until you are faced with a situation that jeopardizes it, that almost takes it away or impacts it.

And what happens is, you then are forced to realize which is truly important. When I was in that hospital and I got to be with my wife (Eniko Parrish), kids, closest friends and family, it just made me realize that I needed to take some time to be present and just mindful. So that’s the difference in me today—just much aware and mindful.

I’m not in control and I never really was, but I think because of how fast things were going within the business, you kind of assume that you do have control. That’s what this awakening was for me, so it’s something that I am actually glad had happened.

What else did being in a hospital for quite some time teach you? I lost the use of a lot of my body for a long period of time. I’m not even joking—I couldn’t even wipe my ass. My wife literally had to bathe me, dress me, you name it. She did it with the help of a couple of nurses who were there.

Did having a lot of time by yourself in the hospital make you reflect? The crazy thing is, I wasn’t by myself, which made me value my wife and kids even more. My kids refused to go to school and stayed in the hospital with me for eight to nine days.

My mother-in-law flew in to help with the baby. My brother dropped everything and came out to LA. So my room was full of the people who actually matter… I’m so much more understanding and mindful of what those relationships are after seeing what was done when there was real jeopardy…

Thank you, God. Seriously, God, thank you. Maybe this was a wake-up call to make me understand that I need to say thank you more. Maybe I am not saying thank you enough, maybe I haven’t said it the way that I should. There’s a reason why what happened, happened and I’m going to figure out what my response should be after. The first step is appreciating, understanding and simply being thankful.

In “Jumanji: The Next Level,” you channel Danny Glover. How did you prepare to do that? Did you watch Danny’s films? …Jake Kasdan (director) and I had a conversation. I was like, it’s only good if it’s believable, that if it’s just a weird impression, then it comes off cartoonish and there’s no value in that.

So I needed to make sure I find a way to ground it. After the first laugh, you are now really buying the fact that this person is really in my body, and you get the journey, you are part of the action and the adventure and you are no longer laughing at just the joke. You really get the story.

And the way that I found to do that was, I only watched “Lethal Weapon 4.” Here’s why. That’s older Danny Glover. In the beginning of “Lethal Weapon,” he was more energetic, more part of everything that was going on. But in “Lethal Weapon 4,” Chris Rock and Joe Pesci had so much energy, they were so all over him and all he was doing was responding. Because it was about settling down and it was about his daughter and everything was relaxed.

That’s how I came up with the idea of going slow and being the complete opposite of what everything else in this world would be.

I’m very lucky and fortunate to have had the opportunity to do it and to get the reaction from Danny Glover which I did. He was happy with the performance.

Did you watch the movie with Danny Glover? No, I didn’t watch it with him, I couldn’t do that (laughs). S**t, I would be a nervous wreck sitting there watching it with him. When we first saw Danny, DJ (Dwayne Johnson) and I were together. Danny was like, “You guys did such a great job. We were blown away.”

But Danny pulled me to the side and said, “I can’t wait for my kids and family to see this because they really know me. You really captured the true essence of me.”

If you notice with Danny Glover, he’s very attentive when he talks. He’s just a good guy and it comes out in his mannerisms.

My performance was able to get to a different level because DJ came in so prepared and so on point as Danny DeVito, that it made me sharpen up my Danny Glover. Once I heard what DJ was doing, I said, sh**, let me make sure that I’m prepared as I want to be. That’s what I mean about the partnership, like we were able to elevate one another’s performance. 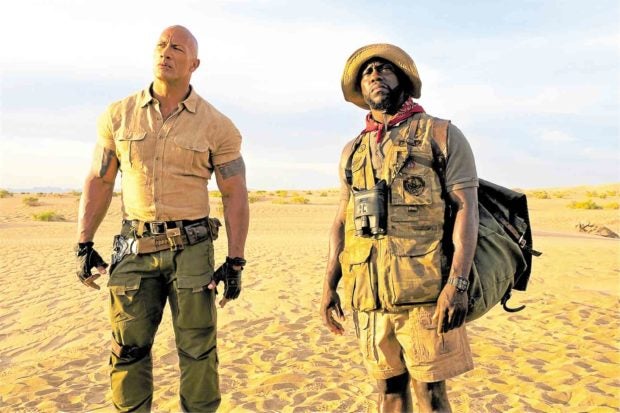 Dwayne Johnson (left) and Hart in “Jumanji: The Next Level” —SONY PICTURES

Speaking of Dwayne, there’s a slight physical difference between the two of you. Slight, very slight, yes (laughs).

Dwayne said in our interview that his worst nightmare was waking up and becoming Kevin Hart. What a d**k (laughs).

What action scene in the movie was particularly challenging? I will definitely say the dune buggy scene because DJ was driving (laughs). I didn’t like that s**t at all. He kept saying we’re fine, it’s going to be alright. I don’t trust him with stunts at all.

And I would say probably the most uncomfortable was on the camel. DJ being a jackass, he is experienced with camels. So he knew that I didn’t know how camels sit down.

So when we were on the camels, DJ had his camera. He’s like, “Yo Kev, come on, we are about to get off the camel.” I have no idea—DJ gave the camel the signal. He knows the signals. And my camel went down first. My life flashed before my eyes (laughs). I was, Ahh, ahh, ahh! And DJ is dying laughing.

Everybody thought it was the funniest thing ever (laughs). But I almost s**tted on myself. I was so scared.