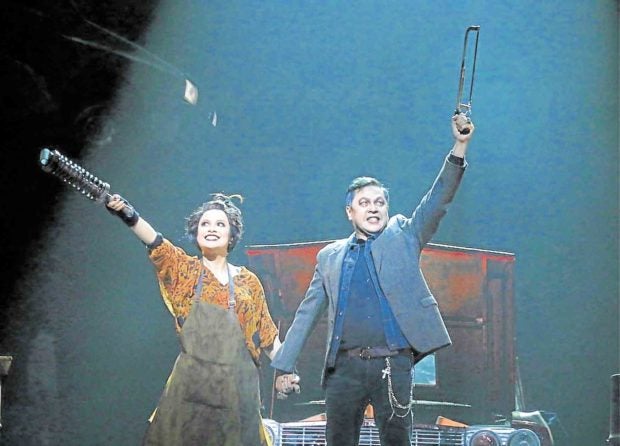 The author (left) with Jett Pangan in “Sweeney Todd”

SINGAPORE—And we’re back at it, picking up right where we left off. Around a month and change after closing “Sweeney Todd: The Barber of Fleet Street” in Manila, we opened in Singapore at Sands Theatre, Marina Bay Sands.

During the hiatus from the show, all of us kept ourselves occupied with other duties, whether parental, familial or, in my case, professional.

The week after closing, we wrapped up “The Voice Kids,” then Gerard and I headed to Australia for our two-weeklong three-city tour. And now, here we are, having just completed our first six shows of “Sweeney Todd” in Singapore.

We had a challenging tech, never mind that we had done the show before. Stage adjustment is always necessary in a new venue, what with some differences in equipment, sight lines from the house to the stage, as well as a brand-new set and backstage layout we needed to get used to. We also had a local crew that needed to learn the show, and a new makeup and hair crew, with our designer Leslie Espinosa at the helm.

Although the company had pickup rehearsals in Manila from Nov. 20-22, I wasn’t able to get into things with them until our first moments on the stage in Singapore. However, it’s amazing how easily I slotted back into Mrs. Lovett.

It’s true what they say: once a Sondheim show is in you, it doesn’t really leave. And thankfully, everything was exactly where I left it, for the most part.

We didn’t have much time to let the show settle into a groove, and opening night happened after just one technical dress rehearsal (which for this show can prove quite the task). However, inspired by our fearless leader Bobby Garcia, we all launched into beast mode, and focused all our energies on telling this macabre and bloody story, no matter what snafus we might run into because of the abbreviated tech time.

And oh, how exhilarating it was!

Our first audience was most informative. We found that the humor of British persuasion was landing solidly (the show is set in Victorian England, and Singapore was once a British Crown colony), so much so that it feels we’ve added a couple of minutes to our running time due to the laughs coming in, and over the new few days, we continued to discover where else we could hold for laughs. And those laughs aren’t just titters, they were full-on guffaws.

Following opening night, SRT held a lovely opening night party at a club called C’est La Vie. However, since it was Bobby’s last night in town, I headed to his hotel room along with a few other friends to hang out (it might also be a reflection of my age; loud parties aren’t really my scene anymore). We ordered food, told stories, and gave him so many hugs, wishing him travel mercies for his trip back to Vancouver.

Now, until our final performance on Dec. 8, our job is to tell our story and have a fantastic time doing it. This proudly Filipino company has only a few more chances together, so we plan on mining what we have left for all it’s worth.

Let’s keep on keeping on, Team Sweeney Todd! What a true honor and privilege it is to share that stage with you. We will definitely deserve our booze at the end of the run.