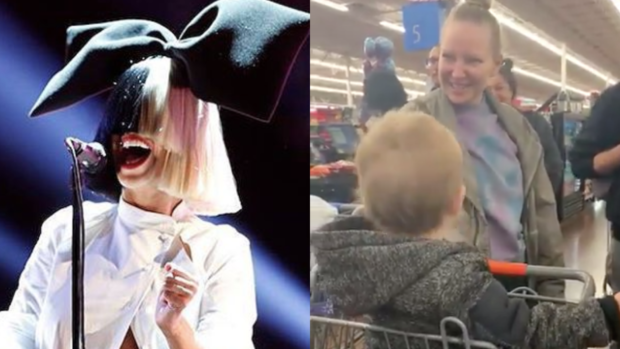 Sia with her black-and-white wig; Sia at a department store in the United States. Images: Instagram/@siamusic; Twitter/@@mexican_locaaa

The musician was initially unrecognized by people since she was not donning her iconic black-and-white wig, which she wears during her performances. Instead, she appeared to sport a bare face with her hair pulled back in a bun while wearing a long gray coat.

However, one of the shoppers was able to see past her “disguise” and immediately pointed out that she was the “Chandelier” singer. Adri Buckles, the woman who recognized the musician, then took to Twitter to talk about Sia’s generous act.

“So @Sia paid for my groceries today thank you so much!!” she said. “The heart and beautiful soul you have for paying for everyone!!”

Buckles apologized to the singer for letting the other shoppers know who she was but explained that “this kindness must be acknowledged.”

So @Sia paid for my groceries today thank you so much!! The heart and beautiful soul you have for paying for everyone!! I’m sorry for telling everyone once I realized who you were !! But this kindness must be acknowledged!!! pic.twitter.com/p7CMvBBQyP

Buckles accompanied her post with a video of Sia at the Walmart branch in Palm Springs. The singer was happily talking to a baby while she was in line at a cashier, paying for someone’s groceries with her credit card.

As Sia was waiting for the payment to finish, one of the shoppers suddenly handed her a bouquet of flowers as thanks for her thoughtful gesture. After successfully paying for someone’s items, Sia asked, “Who’s next?”

With her credit card in hand, she then went to other cashiers and continued to offer to pay for more shoppers’ groceries.

Before she was recognized, the artist introduced herself to others at the department store as “Ci Ci,” as seen in a separate video posted by another netizen (@WhoLeeeeOh) who claims to be a friend of Buckles.

Here a video from my friends IG! pic.twitter.com/JyHhCnXYgM

Buckles also revealed that prior to arriving at the Walmart branch she was in, Sia had been at a TJ Maxx branch doing the same for shoppers there.

Sia had supposedly told them that she only won the lottery. JB

Chance the Rapper to give away free groceries for one year