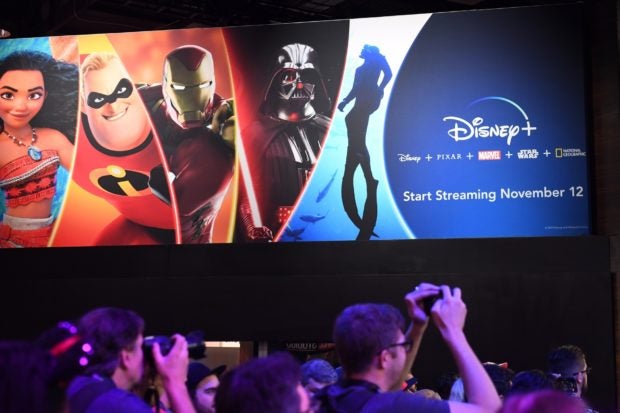 Attendees visit the Disney+ streaming service booth at the D23 Expo, billed as the “largest Disney fan event in the world,” on August 23, 2019 at the Anaheim Convention Center in Anaheim. Image: AFP/Robyn Beck

In spite of a launch marred by technical issues, Disney+ continues to gain ground. According to a study conducted by Apptopia, a website specializing in mobile application data, the Disney+ app has reached 15.5 million downloads since the platform’s launch on Nov. 12.

Subscribers to the new service have already spent $5 million. The figures are impressive but it is important to distinguish between the number of downloads and the number of subscribers. A single family with just one subscription may download the app onto several individual devices.

It still amounts to a bright start for the new platform, which had to overcome a host of bugs at its launch. Nonetheless, the following day Disney+ already claimed that it had attracted 10 million subscribers. Further data will only be made available at quarterly conference calls, the next of which will likely be held in February 2020, although no precise date has been set as yet.

Two weeks after its launch, the precise figures may not be known, but the stock market is enthusiastic about the outlook for Walt Disney Company, whose shares reached a record high of $151.57 on Tuesday, part of that presumably fueled by speculation about the new platform.

Disney is hoping to reach 60 to 90 million subscribers by 2024, a figure that it set itself in advance of the launch of the new platform. Having said that, the newcomer in the world of streaming does not appear to have undermined confidence in other players in the field, which appear to be doing well.

Netflix, for example has increased by 4% since the launch of Disney+, achieving a price not seen since July. “Looking at U.S. (United States) data for these apps (Disney+ is not globally launched yet), we see download and user session trends uninterrupted from their trend lines,” indicated the Apptopia report.

The arrival of Disney+ in the U.S. may not have had much impact on subscriptions to Netflix or Amazon Prime Video, however, this may change once the platform is launched in the United Kingdom and Western Europe in late March, 2020. IB/JB

Apple TV Plus joins streaming wars with Oprah but no library

Freebies are the key hook in new ‘streaming wars’