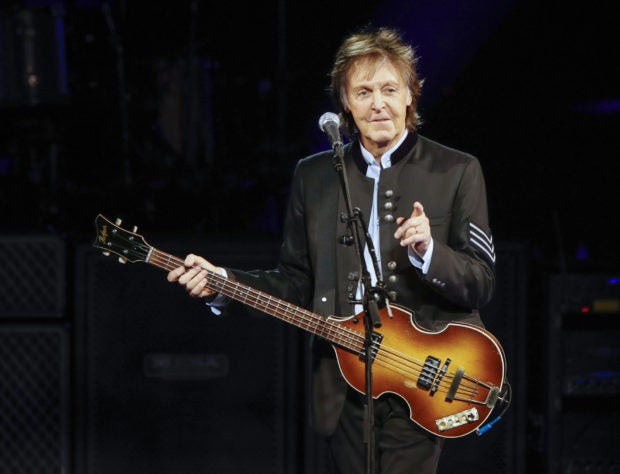 Paul McCartney performs in concert during his One on One tour at Hollywood Casino Amphitheatre in Tinley Park, Illinois. Image: AFP/Kamil Krzaczynski

The songs will also be released together as double A-side 7-inch picture disc single for Record Store Day’s Black Friday on Nov. 29.

Ahead of their physical release, McCartney unveiled “Home Tonight” and “In a Hurry” that he recorded with producer Greg Kurstin during the sessions for his 2018 “Egypt Station”.

The album, which marked the British musician’s seventh studio effort, was notably the first project of McCartney’s solo career to debut at No.1 on the Billboard chart.

“‘Egypt Station’ starts off at the station on the first song and then each song is like a different station,” the former Beatle explained at the time of the record’s release.

“Home Tonight” and “In a Hurry” arrived a few days after McCartney announced that he will be headlining the 2020 edition of Glastonbury music festival alongside Motown legend Diana Ross.

“Having Paul McCartney coming back to headline the Pyramid for the second time next year is an absolute dream come true. There really was no one that we wanted more for the 50th anniversary,” Emily Eavis, who is the festival’s co-organizer, said in a statement.

The musician previously hinted that he would return to the Pyramid Stage in a series of cryptic posts featuring photographs of composer Philip Glass, actress Emma Stone and musician Chuck Berry.

McCartney is also currently working on a musical adaptation of Frank Capra’s 1946 film “It’s a Wonderful Life”, which is set to open in the United Kingdom in late 2020.

For his first foray in the world of theater, the 77-year-old musician has been collaborating with English screenwriter and playwright Lee Hall, who is also writing an accompanying book for the musical.

While waiting for the musical adaptation of “It’s a Wonderful Life”, discover McCartney’s previously-unreleased “Home Tonight” and “In a Hurry”. CL/JB