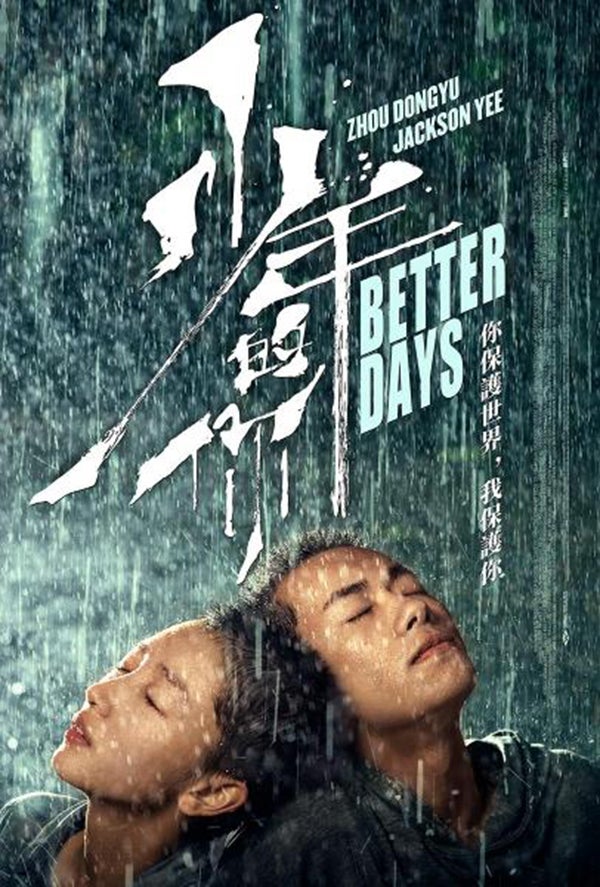 “Better Days” has grossed at least ¥1.4 billion ($200 million) in the nearly three weeks since its release, according to the China Movie Data Information Network.
Image: courtesy of Lian Rui Pictures via AFP Relaxnews

A harrowing drama about school bullying has struck a strong personal chord with Chinese cinema audiences and soared to the top of the box office after authorities belatedly gave it the go-ahead.

“Better Days” shines a spotlight on what the state-run China Daily called “a nationwide problem which has existed for years” but is rarely broached in Chinese films.

A real-life case went viral this week about a seven-year-old girl who needed hospital treatment after a group of fellow pupils forced scraps of paper into her eyes.

“Better Days” has grossed at least ¥1.4 billion ($200 million) in the nearly three weeks since its release, according to the China Movie Data Information Network.

Starring Zhou Dongyu and Jackson Yee, two popular figures in Chinese cinema, the film is based on a novel and tells the story of a teenage girl who teams up with a school drop-out to protect her from bullies.

The girl’s plight has left cinema-goers deeply moved, with many people commenting online that they had been reduced to tears. For a few, the film is a reminder of a past they would rather forget.

The film also highlights the pressures of the “gaokao,” the notorious examination for Chinese universities.

China’s communist authorities appear to have only very reluctantly allowed the film by Hong Kong director Derek Tsang to show because of the sensitivity of the subject.

In February it was abruptly pulled without explanation from the Berlin Film Festival days before it was to be screened.

It also failed to come out as scheduled in June in China’s heavily vetted cinemas, before finally being released in the world’s most populous country on Oct. 25.

Many Chinese have speculated online that it was only green-lighted after cuts were made. The film was released overseas last week.

‘Bully or be bullied’

The Global Times, one of the ruling Communist Party’s mouthpieces, cited a survey that found more than 32% of Chinese primary and middle-school pupils have been bullied.

Six percent were frequently bullied, it said, which given China’s vast population means tens of millions of young children.

“When you were a kid, you bullied others or were bullied by others, right?” says a policeman in the film, summing up the scale of the problem.

Cinema-goers are left in no doubt that the government is taking bullying seriously with public-service announcements before and after the film.

One message details the steps the government is taking, such as the launch last year of a major anti-bullying campaign in primary and middle schools.

On Tuesday, a law professor writing in the China Daily said that the film “has sparked a public debate on school bullying”.

Qiao Xinsheng, of Zhongnan University of Economics and Law, said that a meeting last month of China’s rubber-stamp legislature made clear that bullying is a top priority.

Psychological counseling of bullies is one prime way to stop them, argued Qiao, while also calling for security guards in schools.

The age of criminal responsibility should be lowered from 16 to 12 for the worst offenses, said Qiao.

The girl in “Better Days” seeks help from the school but its weak measures are ineffective and only make the bullying worse.

That was the bitter experience of Huang Hui, a 26-year-old journalist in Shanghai.

As a young teenager, Huang was targeted after she moved from a village to a town boarding school in the central province of Hubei.

Some of her classmates thought her inferior because of her rural background.

One of her teachers also took a disliking to her and accused her of gossiping about him.

“He slapped my face and pulled me by the hair into a wall,” said Huang.

“Then I had to get on my knees in front of the dormitory for the whole night while everyone walked past. It was humiliating.”

The bullies then accused her of spilling secrets about them. They beat her up.

“The torture made me feel it was like a prison or hell,” Huang said, calling bullying in schools “very common.”

A younger brother was also a victim.

With her father working in another city — the case for many millions of children in rural China — Huang took matters into her own hands.

“The law of the jungle, that the weak are the prey of the strong, pushed me to grow powerful in high school,” she said.

“I became a member of a school gang, able to stand up to whoever I didn’t like.” CL/JB