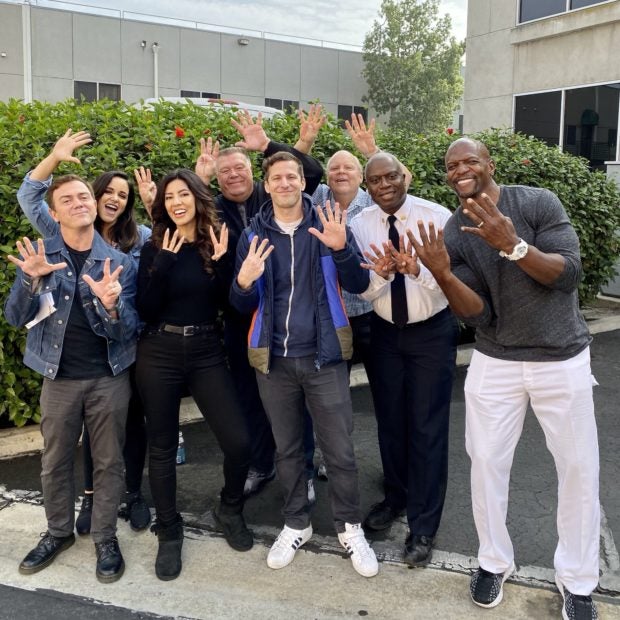 Cop sitcom “Brooklyn Nine-Nine” has been confirmed for an eighth season, just months before season 7 premieres in February 2020.

Good things come to those who w8. The #Brooklyn99 squad will be coming back for Season 8 on NBC! pic.twitter.com/bQsGYA4oG9

The show’s official Twitter account broke the news today, Nov. 15, through a video of an NBC exec addressing the cast and stating that the network “wants you to come back.”

A picture of the ecstatic cast was also shared with the caption “We aren’t done yet.”

We aren't done yet. 😎 #Brooklyn99 pic.twitter.com/xBS7kbxzpU

“Nine-Nine,” created by Dan Goor and Michael Schur, chronicles the antics of a cop squad. Its ensemble cast includes Andy Samberg, Melissa Fumero, Terry Crews and Andre Braugher. The show has been praised for featuring a racially diverse cast, as well as tackling issues such as racial profiling and sexual misconduct.

The future of the series was uncertain after Fox pulled the plug on it in May 2018. Avid fans mourned its cancellation and appealed online for its renewal. Famous fans such as “Star Wars” actor Mark Hamill and acclaimed director Guillermo del Toro were among those who joined the clamor. Finally, NBC granted the show a second life and the sixth season premiered in January.  /ra

ABC cancels ‘Fresh Off the Boat,’ sets finale for February