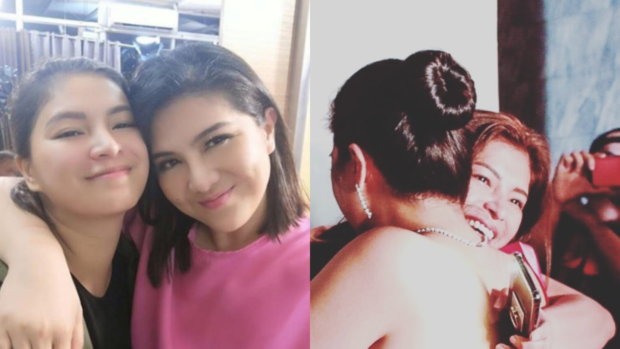 Dimples Romana could not help but turn emotional after Angel Locsin threw a surprise birthday party for her yesterday, Nov. 13, as she turned 35 years old.

“And this is how my 35th birth day began. On set with my beloved [“Kadenang Ginto”] family,” Romana said in her Instagram post yesterday.

“When you have an @therealangellocsin in your life, you are #Blessed,” Romana said in a separate post. She also described Locsin as a “keeper.”

She then revealed that Locsin had thrown the surprise for her while she was busy taping for “Kadenang Ginto.” Romana noted that the schedule for taping was tight at the time since they were trying to finish before her flight to Rome today for the noontime variety show “Asap Natin ‘To.”

Romana also explained that she is not the kind of person who expects much and is satisfied with a simple call, text or hug from her friends during her special day. However, she had received much more than those on the early morning of her birthday.

The actress’ birthday celebration kicked off at around 12 midnight with a cake and a song from her “Kadenang Ginto” family led by producer Carlina Dela Merced and director Jojo Saguin. More than an hour later, Romana was treated to a bigger surprise.

She said that despite Locsin’s busy schedule for her wedding preparations and work, the actress still found the time to surprise Romana. Locsin arranged the surprise with Romana’s husband, Boyet Ahmee, and daughter Callie.

At around 1:30 a.m., Romana was led to a pool area on the set for a supposed scene. In the middle of reading the script, all of Romana’s loved ones suddenly arrived.

Romana later took the time to express her gratitude to Locsin, Neil Arce, Janus del Prado and her “Kadenang Ginto” family for making her “feel so LOVED.”

“At 35, nothing makes me happier than having everyone I love, love me back. Yung Respeto lang ninyo at pagmamahal, sobra Sobra nang regalo para sakin,” Romana stated. “Kasi yun hindi nabibili.”

(Your respect and love are already a great gift for me. Because those can not be bought.)

Romana and Locsin worked together in the 2008 TV fantasy series “Lobo” and in a two-part “Malala Mo Kaya” production in 2017. The two actresses have also been open about their close friendship, and have shared various photos of them together online.  /ra